Apple has been working hard over the past year or so to noticeably improve the Apple Retail Store experience. The Apple Store app, for example, has been greatly enhanced, offering all kinds of free content including a Christmas-themed playlist earlier this week, and now, the Cupertino giant has rolled out its iBeacons infrastructure across the entire network of U.S. retail outlets. For the benefit of the uninitiated, iBeacons hubs will reside in various locations throughout each Apple Store, and depending on whereabouts you are at any given time, beam information about certain products within that proximity via the Apple Store app.

It’s a novel idea, and means that staff aren’t so stretched when trying to deal with large volumes of consumers. Of course, having the Apple Store app installed is the key prerequisite, as is allowing said app to push iBeacons notifications through to you when you’re wandering through an Apple Retail outlet.

The app itself is being silently updated, meaning you won’t have to head over to the App Store and push any update through. Instead, the minor tweaks will occur passively, and once everything has been set up, you’ll be able to confidently walk around an Apple Store and consume all the information you need regarding certain deals, trade-ins and upgrade options without having to scan around for a person in a blue shirt.

If you’re the kind of shopper that knows exactly what they’re buying and doesn’t wish or need to be swayed by these push notifications, then you’ll want to make sure you disable them when prompted after the update. But this new emphasis on interacting with consumers on a more tailored platform will certainly help Apple to increase sales while also appeasing the generally satisfied army of customers. 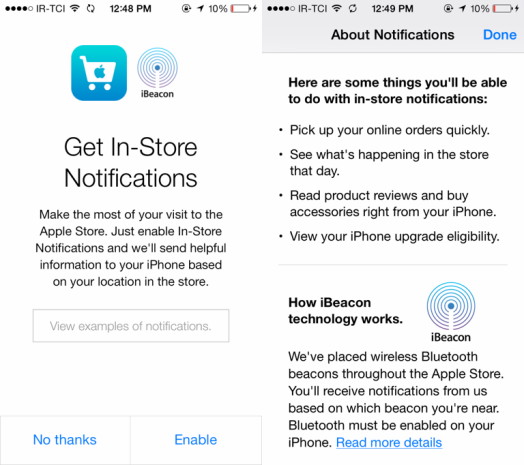 The flagship Fifth Avenue New York City Store has already been packed with over 20 iBeacon transmitters, and if everything goes well, we should begin to see iBeacon tech spread across the globe. At the moment, though, iBeacon is specific only to those in the United States, and if your Apple Store app hasn’t been updated just now, don’t fret, for it looks as though Apple is rolling out the update gradually.