How To Report iMessage Spam Messages To Apple

iMessage, Apple’s cross device messaging service for iPhone, iPad, iPod touch and Mac, has been a relative success since first appearing with iOS 5 and subsequently, OS X Lion. Yet like most fledgling services, it has had its fair share of teething issues, with a notable lack of proper blocking / reporting feature in place for spam messages. iOS 7 will allow users to block Apple IDs causing offence as we already know, but now, the Cupertino has also rolled out a nifty spam reporting feature enabling users to take action against any kind of intrusive or otherwise unwanted behavior.

There was quite a furor earlier this year when it was revealed that a security flaw within the iMessage infrastructure allowed just about anybody to spam another’s device with a simple DoS-like attack. A spate of such episodes, which affected a significant portion of the developer community, highlighted the need for a more stringent approach to security with Apple’s messaging service, and since then, we’ve seen the company make significant strides in an attempt to do exactly that.

The new spam reporting tool, while perhaps not a long-term solution, enables users of iMessage to report nuisance correspondence in a relatively swift fashion. It involves sending a message to imessage.spam@icloud.com, including a screenshot of the message you received. You also need to include the full email address / contact number from which you received the message, as well as the date and the time.

Here’s the complete process as outlined by Apple itself on its website: 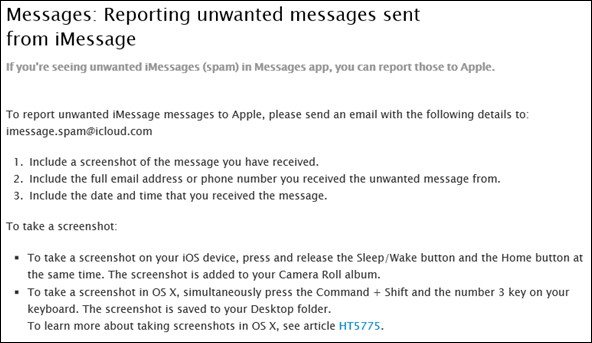 Of course, it’s not quite as streamlined as a spam report button would be, but we’d expect such a feature in due course. Once Tim Cook’s men have finished meticulously piecing together iOS 7 with its upgraded iMessage system, we should expect to see a typically-Apple security enhancement ensuring that iMessage users are better protected than they are at this point in time. 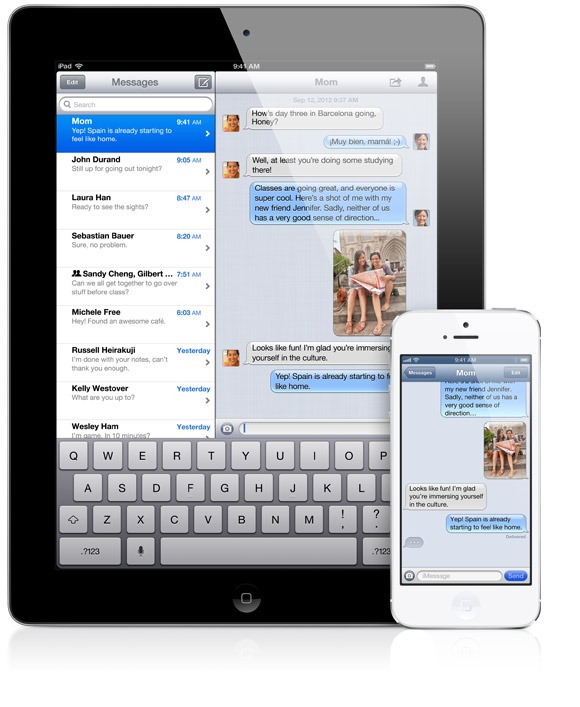 Of all the divisive features to have sprouted up from iOS over the past few revisions, iMessage is arguably the most useful in the day-to-day routine, and while the downtimes are still a bit too frequent for the liking of many, it’s good to see that work is being done to ensure a much improved overall service moving forward.

However, you can still block unwanted iMessages to an extent if you’re running firmware older than iOS 7 beta, check out this post we’ve outlined here on how to block iMessage alerts from a contact on iPhone, iPad, iPod touch.