Part of Facebook’s ‘awesome announcement‘ recently was the addition of Skype-powered video chat, adding face-to-face calling to the social network’s arsenal. As part of this update, Facebook also changed its chat layout, bringing a new sidebar to all Facebook pages.

The new sidebar contains a list of all your online contacts, as well as their chat status – perfect for telling when people are up for a spot of video chat.

The thing is, this new addition to an already crowded Facebook layout, isn’t entirely to everyone’s tastes. It’s large, it’s clunky, and it’s largely unnecessary. The good news though, is that it can be gotten rid of, and with great ease to boot.

In fact, getting rid of the sidebar is so trivial, we can’t help but think that perhaps the guys at Facebook knew it might not be a popular addition to their system and we thank them for making it so easy to banish.

So what do you need to do?

At the bottom-right of the aforementioned sidebar, you’ll spy a configuration ‘cog’ – click this and you’ll be shown a few selections to choose from. The one we’re interested in is the self-explanatory ‘hide sidebar’ button. Tap this and hey presto, you’re free of the sidebar and have just reclaimed those valuable pixels for other things – like having Twitter open perhaps. 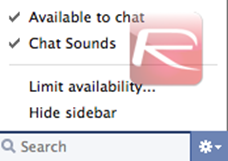 Your friends are still around, so fear not. They’re just back where they always were – accessible, but not trying to take over your screen. But there’s one catch, whenever you go online, the bar comes back in its utmost hideousness.

With Google+ social network gaining traction, at least among the more tech-mad types, and Twitter continuing to grow, Facebook is trying to keep up with the competition. While we have to applaud the Zuck and his merry band of men, we’re not sure adding a great big waste of pixels to the side of the user experience is the way to go about it.

Of course, that might be why Mark is a very rich man, and we’re, well, not.

If you really must have a visible contact list of people you can video chat with, why not just use the real Skype?

Or for the brave amongst you, Chatroulette!