How To Get iOS 7 Like Control Center On Mac

Call it what you like – iOS 7 Control Center is very handy for accessing a number of important apps and toggles. An SBSettings like rip-off derived directly from the Cydia tweaks or merely a clever introduction on the part of Apple Inc. Wouldn’t it be great if we had something similar for machines running OS X that let us quickly access iTunes, display and time based functions directly from the Menu Bar? Well, it seems like the guys over at It’s About Time Products LLC were reading our thoughts and have introduced Controls+ for OS X, available now on the Mac App Store. 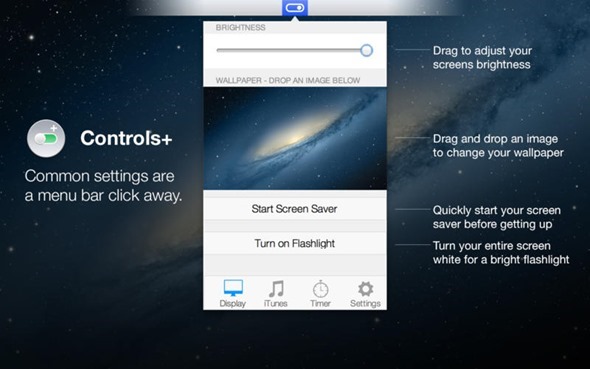 The developers behind the app are themselves describing the product as "Control Center for Mac" with commonly used settings and useful information being only a simple click away. We previously brought you a post about a number of quick access iOS 7 style toggles that let users access a number of frequently used areas of the Mac, but Controls+ takes things a little step further by bundling a few of these features into a native OS X app that sits nicely in the Menu Bar for immediate access. 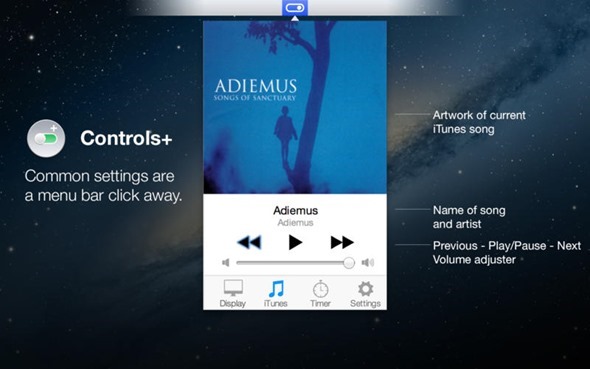 After purchasing and installing Controls+ users will be able to adjust the brightness of the Mac display with a very simple to use slider. The app also has the rather splendid offering that allows users to drag an image into a placeholder to quickly and efficiently change the desktop wallpaper on the machine. The currently selected screensaver can also be activated from within Controls+ as well as invoking a function that will turn the screen of the display entirely white; a feature that the development team think is particularly useful for video calling on the dark. 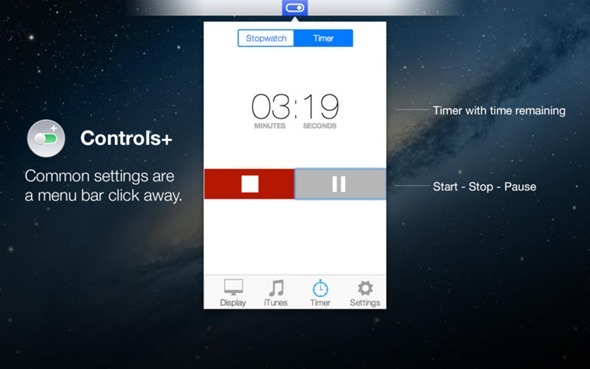 Music that is playing through iTunes also makes a cameo appearance through this app. The album cover from the currently playing song is available in a nice little interface as well as controls to skip through the current playlist and adjust the volume of the music. If that functionality isn’t enough for you then you’ll surely be bowled over by the introduction of a timer and stopwatch type feature set. All very simple things that are accessible through a number of different places on the Mac, but it’s always great to have everything in one place.

(Source: Controls+ for Mac on the Mac App Store).