Referred to as coffee table computers because of just how easy it is for anyone and everyone to start using them, smartphones (and tablets in particular) need a User Accounts feature quick and fast. People living alone don’t have to face this problem, but when you’re like me or the millions of other tablet owners who live with multiple people under the same roof, privacy of personal data – social networks, email accounts, browser history etc. – is of great importance.

The lack of user accounts is what it is called a low-hanging fruit – missing features that significantly effect user experience.

Earlier this month it was discovered that the ability to switch between user accounts is hidden inside Android 4.1 Jelly Bean which suggests that the feature will be a part of future version.

Now, developer Raghav Sood from XDA-Developers has come up with an app that makes use of the code hidden in Jelly Bean to provide a proper interface to the user accounts feature.

Named User Management, the app lets you create a new user, view existing users, rename them, delete them and, of course, switch between them. Pre-requisites include having root access on a smartphone / tablet with Android 4.1 Jelly Bean.

As it’s the first version of the app, there are going to be bugs and features that could use improvement. 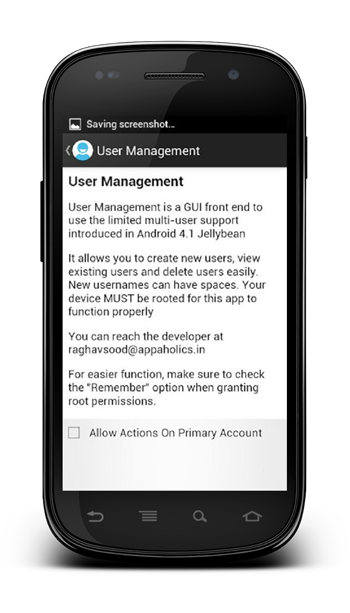 The first and most glaringly missing thing you’ll notice is that this doesn’t add a full fledged user accounts feature; it just creates an interface to the hidden (and limited) feature that comes with Jelly Bean. This is something that Sood can’t implement at the moment as it is too huge of a project for a single developer.

If you’re looking for a better way to manage user accounts on your Android device, I highly suggest you check out SwitchMe. What it does is install a fresh copy of your ROM without your personal data and personally used, third-party apps; this offers more privacy at the cost of storage space. 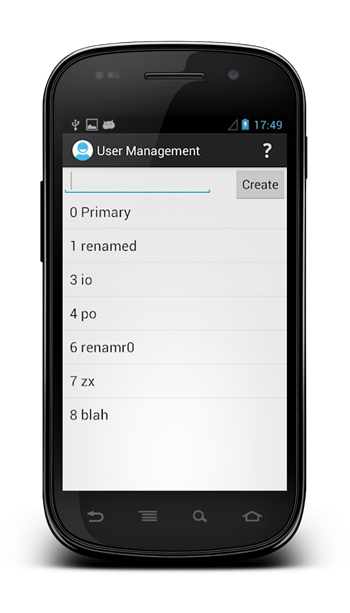 As mentioned before, Google is expected to introduce a desktop class user account feature to Android soon. Until then, you can use User Management or SwitchMe.