How To Create Nested Folders In iOS 7.1 [VIDEO]

iOS 7.1, which Apple finally released to iPhone, iPad and iPod touch users earlier on the month, brought with it a plethora of changes and enhancements including improvements to Siri, iTunes Radio and the introduction of CarPlay. But where iOS 7.1 giveth, iOS 7.1 also taketh away, and as well as plugging the Evasi0n jailbreak, the latest firmware also appeared to prevent a mistake of a feature that allowed for nested folders on the home screen. Now, though, there’s a handy little workaround, and although it does require a little bit of extra effort, still does the same job.

Nested folders, or folders-within-folders, make it a lot easier to maintain a clean, organized and clutter-free home screen. As long-time readers will know, we’re strong advocates of the minimal approach here at Redmond Pie, and as such, feel compelled to pass this useful tip onto those of you who share our sentiments. 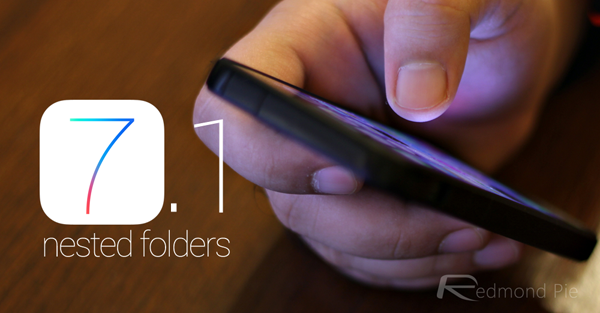 As aforementioned, it’s not quite as easily achieved as with iOS 7.0.x, but hey, it works, and considering there’s no iOS 7.1 jailbreak yet, it’s a relief to see that this little ‘hack’ is possible at stock level.

Below is a step-by-step tutorial on how to create nested folders in iOS 7.1. There’s no risk attached, and your device will not come to any harm while following it, but nevertheless, you’ll need to read each step closely in order to achieve the desired result.

Step 1: Locate any two apps on your device’s home screen. It doesn’t matter whether they’re native or third-party, although it makes sense to select two that you wish to place into a folder. You will also need to find a folder that you wish to nest within another.

Step 2: Place one of your icons over the other, and as soon as the folder animation process begins, quickly grab and hold the folder designated in the previous step.

Step 3: Once the new folder zooms and is subsequently formed, the folder you’re still holding can subsequently be released, and just like that, you’ve made your very first nested folder on iOS 7.1.

If you’re confused on how to go about the process, simply watch the video embedded below:

Sure, it’s not ideal to have to jump through hoops in this manner, but it does work, and so if you’ve become accustomed to nested folders on your iOS 7 device, give these steps a try and be sure to let us know how you get on by dropping a comment below.

Thanks, Zubair for sending this in!