The Apple iPhone is currently into its fifth production model and has been purchased by hundreds of millions of people around the world since its first release in 2007. The iPhone is known the world over as one of the, if not the most advanced smartphone in existence thanks to the iOS operating system that powers it. 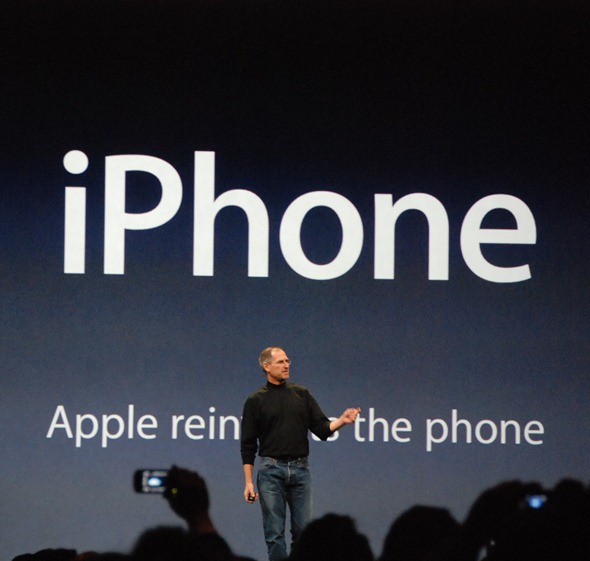 But what do we really know about the birth of the iPhone and the software which runs on it? Up until version 3.0, what we know today as iOS was originally known as the iPhone OS, so just what prompted the name change and why did it take so long? Up until 2007 Apple hadn’t even been a part of the mobile telephone industry, but it has only taken them five versions of their device to find themselves sitting at the top of the tree as the world’s largest vendor of smartphones.

I am pretty sure that everyone will of heard of the company Cisco, who are a huge computing company operating around the world. It seems to be a little known fact that Cisco Computing actually owned the iPhone and iOS trademarks long before Apple intended on using them, so just how did the Steve Jobs and Apple Inc. come to get ownership of the trademarked names?

Adam Lashinsky, author of the new Inside Apple book, covers the topic and explains how Steve Jobs walked all over Cisco executive Charles Giancarlo. Although the companies existed to serve different markets, Cisco had owned the iPhone and iOS trademarks for many years before Apple had the idea of using them. Lashinksy reports in his book, that when Apple had settled on the ‘iPhone’ as the name of their new device, it never even crossed their mind that Cisco, or any other company would have that name trademarked considering they already used names like iPod and iMac without issue.

Giancarlo fielded a call directly from Steve Jobs. “Steve called in and said that he wanted it,” Giancarlo recalled. “He didn’t offer us anything for it. It was just like a promise he’d be our best friend. And we said, ‘No, we’re planning on using it.’ ” Shortly after that, Apple’s legal department called to say they thought Cisco had “abandoned the brand,” meaning that in Apple’s legal opinion Cisco hadn’t adequately defended its intellectual property rights by promoting the name. To Apple’s way of thinking this meant the name iPhone was available for Apple’s use. Giancarlo, who subsequently joined the prominent Silicon Valley private-equity firm Silver Lake Partners, said Cisco threatened litigation before the launch. Then, the day after Apple announced its iPhone, Cisco filed suit.

The negotiation displayed some classic Steve Jobs negotiating tactics. Giancarlo said Jobs called him at home at dinnertime on Valentine’s Day, as the two sides were haggling. Jobs talked for a while, Giancarlo related. “And then he said to me, ‘Can you get email at home?’ “ Giancarlo was taken aback. This was 2007, after all, when broadband Internet was ubiquitous in homes in the US, let alone that of a Silicon Valley executive who had worked for years on advanced Internet technology. “And he’s asking me if I’m able to get email at home. You know he’s just trying to press my buttons—in the nicest possible way.” Cisco gave up the fight shortly after that. The two sides reached a vague agreement to cooperate on areas of mutual interest.

If the book is to be believed, then Apple actually acquired the rights to the iOS name prior to it actually being used and made public knowledge that the name change was happening. Cisco had previously used the IOS name as an acronym for their Internet Operating System which powered the company’s core equipment, but you get the feeling that even if Cisco hadn’t played ball then Steve Jobs would have still come out the victor.