As Apple has just posted record-busting sales figures for the opening fiscal quarter of 2012, the amount of intrigue in the company based in Cupertino, California is at an all-time high. 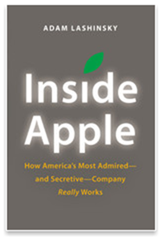 It’s times like this when we as technology fans would not mind taking a vicarious look into what it’s like to be inside one of the world’s most secretive companies. How do things work day-to-day? What’s it like having Tim Cook as a boss? And more to the point, how does one concentrate with so may iDevices for distraction?

A new book entitled Inside Apple apparently answers the questions and feeds the curious minds of Apple fans the world over. Written by Adam Lashinsky, it is said to offer a previously untold insight into how the company functions from the inside out.

INSIDE APPLE reveals the secret systems, tactics and leadership strategies that allowed Steve Jobs and his company to churn out hit after hit and inspire a cult-like following for its products.

Certainly, if it lives up to the billing, it could wind up being a very intriguing read. The last time we got a bit excited about a book here at Redmond Pie, it was the highly-anticipated biography of Steve Jobs – the only ever official tell-all of Apple’s charismatic co-founder. Having achieved so much, the book pretty much wrote itself, and acclaimed storyteller Walter Isaacson didn’t really divulge to us much we weren’t already aware of.

Let’s hope we’re in for a treat this time around, and get some juicy information on what is one of the world’s most interesting companies. Excerpts have been leaking during the last couple of days to whet the appetite of the masses, but now the whole thing is available via the iBookstore, Kindle Store, and of course, Amazon.com:

We’ve already ordered ours; will you be purchasing too? Let us know via the usual mediums below.