SpoofTexting For iPhone Lets You Send A Message To Any Number, From Any Number – Download Now

Text messaging on mobile devices is obviously a huge global business, with networks around the world honoring billions of messages each day, and also bringing in substantial finances from texts. Once upon a time, short messages were used primarily in a social settings amongst friends, but over the years, the use of text messages have become increasingly more important with their place being cemented in businesses and the media alike.

While text messaging is showing signs of becoming a commonplace in the cutthroat business world, the developers over at Teltech Corp prefer to adopt a slightly more impish approach to using the short messaging service by producing an iPhone tweak known as ‘SpoofTexting’.

We are offering no prizes to those of you who can guess what this piece of software actually does, but we are told that it does exceed the functionality of similar offerings which only ‘mimic’ the receiving of a text message. SpoofTexting is said to "unleash your inner prankster", although the jury is still out on whether or not that can be deemed a positive thing or not.

Installation of this Spoof tweak allows alterations to be made to the native Messaging application on the iPhone, with a new option being added in he top navigation bar to the right hand side, where the compose message option lives. Composing a new SMS with this option gives users the ability to send a text message to any number they choose, and, from any number they wish to send it, but beware that this tweak only works in the United States of America.

The supposed benefit of doing this, is that the recipient has no way of differentiating between a text from the real owner of a number, and that which has came from the SpoofTexting tweak with the number which has been set as custom. This plugin to the native Messages application is applicable in the USA only and is shown to work with Sprint, Verizon, AT&T and T-Mobile. 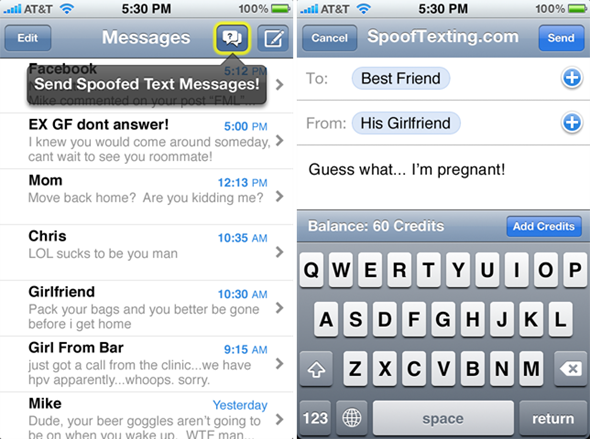 Whilst I do agree that the SpoofTexting plugin could provide some light hearted entertainment when used purely for pranking friends, I somehow get the feeling that a large portion of users would actually use this for something a little more sinister which in all honesty makes me a little uneasy.

SpoofTexting is available to download free of charge via the BigBoss repository for iOS 4 or higher and I believe requires the purchase of credits to use.

Thanks Al for the hat tip!