If you are a relatively new owner of an iPad 2, then it may come as a shock when you first turned the device on and noticed that it was missing some key stock applications which are installed natively on the iPhone and iPod touch. I am pretty certain that some users will be entirely perplexed by this, and will have spent a large amount of time searching and seeking clues which point them in the direction of their missing Stocks, Weather, Calculator, Voice Memo, Compass and Clock application. However bizarre it may seem and difficult it may be to take in, I am here to tell you guys that Apple just doesn’t deem it necessary to include these applications on the iPad.

Now that you have had a few seconds to recoil in horror and absorb that information, let me also be the one to tell you that all is not lost and not for the first time, the jailbreak development community has come to your rescue. iOS developer Ryan Petrich, who has gained recognition for his widely adopted Activator tweak, had all hands on the deck once again producing his latest iPad enhancement which brings these six native applications directly to the iPad’s SpringBoard.

The tweak, which has been christened ‘Belfry’ has been released into the BigBoss repository by Petrich and is a totally free of charge download for all jailbroken iPads. Installation of the Belfry tweak will add six additional icons to the SpringBoard, with these being able to be launched as normal apps and providing access to familiar looking applications from the iPhone. There has been some talk around the community for a while about someone actually making this a reality, but up until now it hasn’t actually been actioned. If you intend of download Belfry to get your hands on the beloved Weather and Stocks apps then make sure you read the information within Cydia first. 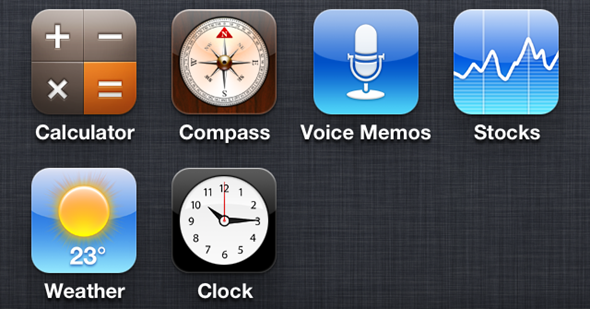 Belfry is only available for iPads running iOS 5 or higher, and users will definitely experience some visual anomalies after the iPad has rebooted. Belfry requires additional files to be downloaded from the internet to make this a possibility so don’t be alarmed if the process takes slightly longer than you would normally be used to for a Cydia download. As mentioned earlier, when running these applications it is expected that graphical errors will be presented due to the way the iPad handles the running of native iPhone applications. This can be partially rectified by installing a tweak known as RetinaPad alongside Belfry which renders the applications in full screen mode in the best possible way for the iPad.

If these applications are something you have longed for on your iPad then head on over to Cydia now and download Belfry for free. I can’t help but feel that part of the reason that Ryan would  produce such a tweak is to give a real world example of just how useful his RetinaPad software really is, but you be the judge of that.

Thanks Luis for the hat tip!