New details have emerged not only about Apple and Google’s coronavirus contact tracing API, but also how the project came about in the first place.

A new CNBC report explains that Apple first started working on it after a handful of employees brainstormed it in March.

CNBC notes that the speed at which Apple was able to spin up the project was unusual for the company, something that will be clear to those who follow it. Projects often take years to come to fruition, but this API will be ready by May 1. That means it will have been put together in less than two months.

Google was also working on something of its own, with the two sets of engineers connecting the dots together.

Within a few weeks, the Apple project – code-named “Bubble” – had dozens of employees working on it with executive-level support from two sponsors: Craig Federighi, a senior vice president of software engineering, and Jeff Williams, the company’s chief operating officer and de-facto head of healthcare. By the end of the month, Google had officially come on board, and about a week later, the companies’ two CEOs Tim Cook and Sundar Pichai met virtually to give their final vote of approval to the project. 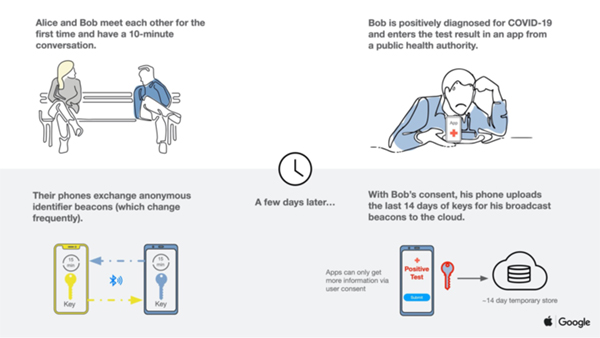 The combination of Apple and Google allows both iPhones and Android phones to support the API. That, in turn, means that users of both ecosystems will have their phones communicating with each other, preventing a possible blind spot from impacting the API’s usefulness.

When the API goes live next month, developers will be able to hook into it, with apps from health authorities around the world already working to make that happen.