Windows 8 has polarized the world. While some love the all-new Metro interface and laud Microsoft for ditching the old desktop metaphor in favor of a new, tile based option, others simply cannot stand it. We’re still not entirely sure which extreme we sit on here at Redmond Pie, or indeed whether it’s either, but what we do know is we want to see Windows 8 on something a little larger than your average monitor.

Hold that thought for a moment. 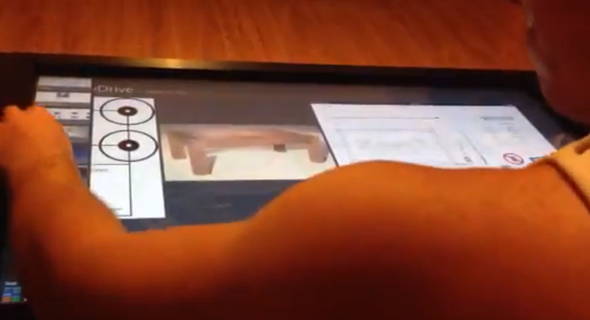 Now, remember the Microsoft Surface? No, not the Windows 8 tablet that Microsoft is pinning all its hopes on all of a sudden, but rather the touch-enabled coffee table that has been around for what feels like forever, but never really took off. Yes, that really expensive one. Wouldn’t that be cool if it ran Windows 8?

The video shows Windows 8 in all its glory, but this time it’s table-sized. There’s nothing quite like operating a touchscreen that’s as big as a coffee table, and when you throw the Windows 8 Metro interface into the equation, then things start to get really interesting. We just wish we had room for one ourselves. Oh, and the money to buy one, of course. Alas, we have neither, so we’ll just make do with watching the video on repeat! What’s not to love, it’s got Angry Birds on it for heaven’s sake!

This isn’t the first time Windows 8 has found its way onto a giant screen. Microsoft CEO and co-founder Steve Ballmer has an 80-inch screen in his office, which, so we’re told, plays host to Windows 8. We’re still trying to get our heads around that, but it sounds super awesome, even if we’d have to put up with Ballmer just to see it.

Windows 8’s move to the Metro interface has caused quite a bit of controversy, but something tells me we wouldn’t be quite so excited about seeing Windows 7 or, shudder, Windows Vista running on a Surface table. Nope, we would not.