Gangnam Style Is Coming To Just Dance 4 Via DLC On Xbox 360, PS3 And Wii

There are many popular channels on YouTube, and many relatively unknown folk have made a name for themselves on the Google-owned viral video hunt. With that said, few have managed to generate the hype of Korean rapper / pop star PSY, whose "Gangnam Style" song has eclipsed anything the web has ever seen. Although first uploaded in September, it didn’t really go viral until late August-early September, and has accumulated almost half a billion views on the way to becoming the fourth most watched – and most liked – clip in YouTube’s history.

As well as making himself a national hero in South Korea, he has appeared on pretty much every talk show across the US and much of the world, often pausing to explain the origins of Gangnam Style, which is written about his hometown. The video is as enjoyable, fun and catchy as the song, while PSY himself also comes across as a very likeable guy, and it’s the combination of the three which has seen it withstand the test of time – continually picking up hundreds of thousands of daily views.

Now – somewhat predictably – PSY and his record-breaking hit has been confirmed as appearing on one of the many popular dance-themed games for the big three consoles. Just Dance 4, which perhaps needs no explanation whatsoever, will house Gangnam Style from mid-November, and dancing fans will be able to get their fill via DLC. Dance Central 3 – the main rival to Just Dance – would probably have liked to include Gangnam Style on its roster, but nevertheless, the infectious tune will subconsciously have coerced many into buying both titles. 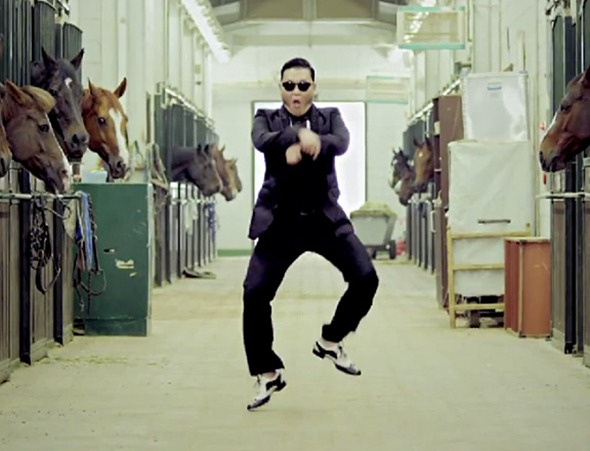 As well as making YouTube his own, PSY has also dominated the charts of late, reaching the top spot in the UK, New Zealand, Germany, and his native Korea, while also reaching number two in the Billboard charts. Although previously unknown throughout most of the world, PSY has been an active artist for some thirteen years, accumulating half a dozen chart-toppers in his home nation prior to Gangnam Style.

Just Dance 4 is available right now for those rocking a Nintendo Wii, Xbox 360 or PlayStation 3, and will also be released for the Wii U, which is set to arrive on November 18th.