There’s always a very interesting period of smartphones comparison whenever a manufacturer introduces a new device into the market. The majority of non-technically au fait consumers will simply make their decisions based on the manufacturer of the hardware or the underlying operating system, but there’s always another particular subset of enthusiasts.

Such users are not only passionate about how a new device performs, but also how it performs in comparison to the competition that’s already available. With that in mind, it was inevitable that Samsung’s latest 2016-released Galaxy Note 7 was going to be compared with Apple’s 2015 iPhone 6s range. 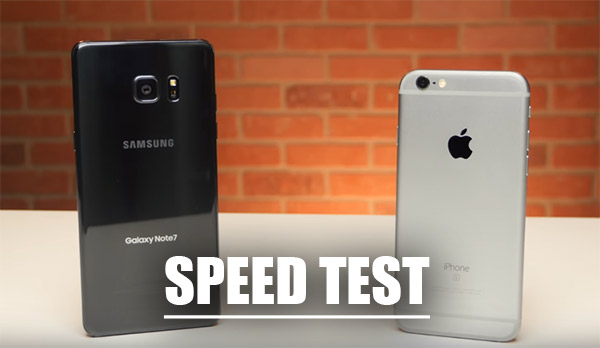 The recently announced Galaxy Note 7 has managed to once again reignite the appetites of those who prefer their smartphone to come packing with a stunning display that eclipses the size found on most smartphones. As is always the case with Samsung’s Galaxy Note range, the stunning 5.7-inch display is the focal point of the hardware, but if you abstract that away, has Samsung made enough changes in the underlying hardware and software to allow the Note 7 to compete on-par with other devices on the market? We find out in this video which pits the Note 7 against the iPhone 6s in a head-to-head real-world speed test.

We would have much preferred to see the Galaxy Note 7 compared against Apple’s iPhone 6s Plus, as that is the Apple device that would most likely compete with Samsung’s latest flagship, but even with the 4.7-inch iPhone 6s, we can get a good understanding of how Samsung’s latest hardware and software combination compares to a device that’s pushing close to its twelve month anniversary, and in all honesty, the results don’t speak overly highly of the product that Samsung has built.

On the first round of launching apps, Apple’s iPhone 6s almost instantly catapults itself into a lead by managing to invoke and run apps much more efficiently than the Note 7.

In fact, as much as Samsung and fans of the company’s devices may not actually want to hear this, Apple’s iPhone 6s, which is nearly a year old and has half the RAM of the Note 7 at 2GB, managed to complete both laps of app launches before Samsung’s latest hardware had even finished the first.

Check out the video for yourself to see what you think of this head-to-head race.

Performance asides, there’s no denying that many consumers have been eagerly awaiting the launch of Samsung’s latest Android-powered device. Apple on the other hand is due to launch its 2016 flagship smartphone range in a few weeks time. It will be interesting to see how will those perform against Galaxy Note 7.