The Galaxy Note 7 is the hot new ticket in town right now, and while Apple’s iPhone 7 is going to get its fair share of the limelight next month, right now is Samsung’s time. That comes with all the downsides as well as the upsides, though, and Samsung today received something of a ding after a YouTube video appeared to show its Note 7 having its screen scratched all too easily. 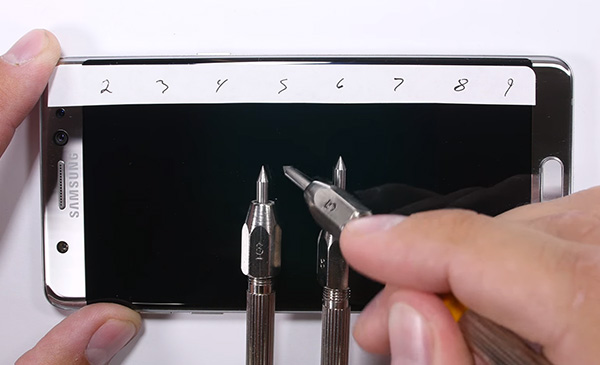 A YouTube video by Zack from JerryRigEverything appears to show a Galaxy Note 7 having its screen scratched by a metal pick with a rating of 3 on the Mohs scale of hardness. Standard glass sits somewhere between 5 and 6 on the same scale, so scratching the screen with a pick that has a rating of 3 is not good news. In fact, it should be impossible.

While the internet did what the internet does and whipped itself into a frenzy, the folks at Corning were contacted and asked the obvious question – what’s going on? As it turns out, the likely answer is a simple one. The phone wasn’t being scratched at all. The pick was falling apart.

The hardness pick that was used in the video was a 3, that’s considerably softer than the glass material. Oftentimes when you have a softer material like that, and depending on what kind of loads you have used, you tend to see material transfer on the test substrate.

Material transfer on the test substrate is not necessarily a scratch but it can appear to the untrained eye as a pretty visible scratch. We don’t know whether or not that is what is being seen in the video. Certainly in the testing we’ve done internally, we don’t see that issue at all with similar picks on the Mohs hardness scale.

The folks from Corning also went into further detail, but the upshot is that they don’t quite believe that their screen was getting scratched at all, but rather it was actually breaking the pick that was being used to try and scratch it. The pick was apparently leaving residue on the screen itself, making it look like it was scratched. This residue, apparently, is far from easy to remove too, so simply wiping the screen wouldn’t be enough to clean it. According to Corning, that is.

Whether you believe the people who make the glass or not, it’s suspicious that a relatively soft pick could be capable of scratching glass, let alone Corning’s fancy super-touch glass. It’s possible the unit being tested was faulty, but again, glass still shouldn’t scratch like that. While we can make our own minds up as to what was going on during the video, we will likely never have an answer that will please everyone, but for the time being, no, the Galaxy Note 7 does not have its own screengate phenomenon. Not even one bit.