Now that Samsung has officially announced Galaxy Note 7, there are a number of notable large-screen devices available on the market that could well compete with Samsung’s latest flagship and that are worth considering and comparing to it.

Samsung’s Galaxy Unpacked 2016 event not only witnessed the official introduction of the Galaxy Note 7, but it also meant that there is now a serious contender that sits alongside Samsung Galaxy S7 Edge and Apple’s iPhone 6s Plus. But which one reigns supreme, and more importantly, which one would you choose? 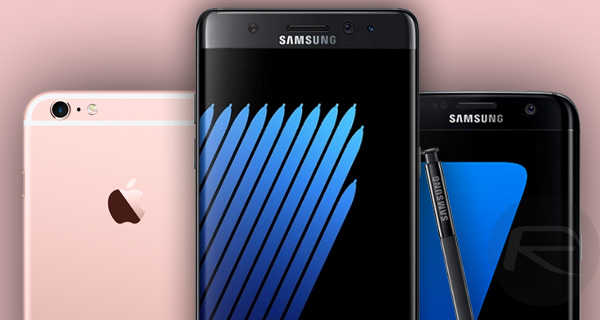 Almost an year old now, Apple’s iPhone 6s Plus is due for an upgrade, which should happen at a dedicated media event next month, but for the time being, it still remains Apple’s large-screen flagship with its 5.5-inch Retina HD display. The existing Galaxy S7 Edge chimes in with the same size display as the iPhone 6s Plus, albeit a Quad HD 2560-by-1440 offering, but both are dwarfed by Samsung’s 5.7-inch Galaxy Note 7 packing in a monstrous Quad HD always-on Gorilla Glass 5-protected display with 518 pixels-per-inch. Size isn’t necessarily everything, but in this instance it counts for a lot.

Consumers may not want to admit it, but all three devices do have some similarities as well, such as the underlying 64-bit architecture, premium build quality, and the option of having a front flash and live or moving photo-taking ability. Both Samsung devices, as well as the Apple iPhone 6s Plus, offer contactless payment support as well and they also come with some form of biometric authentication. While all three devices offer fingerprint detection, the new Note 7 goes above and beyond with the integration of its iris scanner.

Performance wise, the Galaxy Note 7 contains differing processors depending on the model and region. Users can expect a Samsung Exynos 8890 2.3GHz option, or a Qualcomm Snapdragon 820 series clocked at 2.15GHz. A similar set up is in place with the Galaxy S7 Edge, whereas Apple’s iPhone 6s Plus ships with the Cupertino company’s Apple A9 chip with M9 motion coprocessor for activity tracking. Apple also gets the most out of the included 2GB RAM thanks to some serious software enhancements within iOS, but how it fares compared to the 4GB packing Note 7 in real life is yet to be seen.

Check out the full specs comparison sheet of the Galaxy Note 7 vs iPhone 6s Plus vs Galaxy S7 Edge below to see how three of them compare to each other specs-wise in different departments.

If purchasing purely on paper, and having no allegiances to either platform, it is a very difficult decision to make. The Galaxy Note 7 and Galaxy S7 Edge may look to have a more performant processor and RAM partnership in place, but speed and performance tests have already shown that Apple gets significantly more performance out of what seems like a lesser specification.

Of course, if you simply cannot deviate from Android, then you’d be mad not to part with ~$850 to own the new beautiful Galaxy Note 7 – which comes with a stylus (S Pen).

In the end, it probably just comes down to the preference between iOS and Android. If Android is your choice of platform, there’s no doubt that you can’t go wrong with any of these two 2016 Galaxy smartphones. But if you are on iOS side of the fence, while iPhone 6s Plus is still a pretty good performant for an year old device, we’ll recommend waiting for iPhone 7 and 7 Plus which are due to be announced in only few weeks time from now.