Galaxy Note 3 Neo And Neo LTE+ Announced By Samsung: Here Are The Details

Earlier on this month, Samsung’s plans to release a slightly cheaper, smaller and less-powerful Samsung Galaxy Note 3 Neo hit the blogosphere, and today, the Korean company has officially unveiled the device. Although it was initially thought that there would only be one tweaked Note 3 in the offing, there are actually two variants of the Neo, including the standard edition and a second, Neo LTE+ handset with 4G capabilities. So if you like the Galaxy Note 3 but don’t need the large display, top-spec hardware or high-end price tag, then the Neo range might just take your fancy.

Although major new mobile releases from Samsung are relatively infrequent, the company pushes out swathes of handsets in between the show stoppers like the Galaxy S and Galaxy Note ranges. The Galaxy S4, for example, has spawned several variations so far in its relatively short lifespan, including the likes of the Zoom – for camera enthusiasts – and the Active, which offers a ruggedized build for those wary of causing accidental damage. 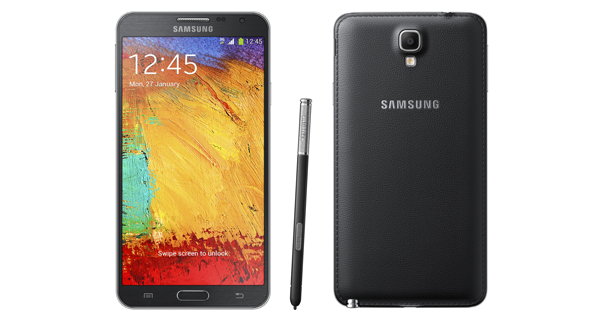 But the Note 3, since hitting the scene back in September, hasn’t seen the customary range of spin-off devices. Samsung Poland changed that little statistic this morning by officially taking the wraps off the Galaxy Note 3 Neo, and as everybody expected, it is slightly smaller. The fact that there are two – one 3G and a separate 4G model for those wanting faster cellular connections – is something of a turn up for the books, and the fact that the latter has been labeled as the LTE+ means it’s supportive of the slightly more advanced LTE Cat 4.

If anything, the LTE Cat 4 support with the superior model is the flagship feature of two devices that enjoy slightly-better-than-average specs. Yes, you do get a 5.55-inch Super AMOLED display with the Neo and the Neo LTE+, but it’s worth pointing out that with a resolution of 720 x 1280 pixels, it’s not full HD, and will be nowhere near as crisp as what many will have accustomed themselves to.

The rear-facing camera of both devices is an 8-megapixel affair, featuring OIS for a better performance. You get a very substantial 2GB of RAM, allied to 16GB of internal storage and a 3,100 mAh battery.

Those opting for the 3G version will get a quad-core 1.3Ghz or a dual-core 1.7GHz SoC depending on their particular market, while the LTE+ variant will pack a hexa-core processor,comprised of two 1.7-GHz A15 cores and  a further four 1.3-GHz A7 cores.

Both will be loaded with Samsung’s very own TouchWiz Launcher, and while the Android 4.4 update will probably become available soon after the release of the Neo paring, each will run Android Jelly Bean 4.3 out of the box.