Samsung is the mobile industry’s power releaser, and even though the Galaxy Note 3 has sold in excess of 10 million units since the September release, the Korean company is already planning a revised, cheaper model. According to a leaked snap, we can now see how the handset stands up against the real deal, and since, in the eyes of many, the Note 3’s specs amount to overkill anyway, perhaps the Neo model will sell strongly once it eventually debuts.

There’s no getting away from the fact that more and more high-end devices are being spec’d-out beyond necessity, but whilst Samsung has continued to bulk up its flagship smartphones with very little relent, this is the first time that any Note has been downscaled as a cheaper option. We’ve seen the Galaxy S3 and S4 Mini, both of which are noticeably smaller and less feature-rich than their all-singing counterparts, and with the Note 3 being among the most expensive handsets of all time, the Neo model should find a niche.

As well as the leaked snap, which you can view below courtesy of SamMobile, several reports have offered details of the Note 3 Neo’s specs. Apparently, there’ll be a 5.55-inch 720p Super AMOLED display, and although this isn’t as sharp as the real Note 3, which offers a 1080p panel, it will still offer a generally crisp performance.

To the rear, there’ll supposedly be an 8-megapixel camera, and if, as some suspect, this is borrowed from the Galaxy S3 era, it’s unlikely to set the world alight.

Despite a couple of shortcomings, you’ll still get a useful 2GB of RAM, as well as an all-new 6-core processor, and with a 3,100 mAh battery keeping things ticking over, it should easily get you through a whole day’s moderate use. 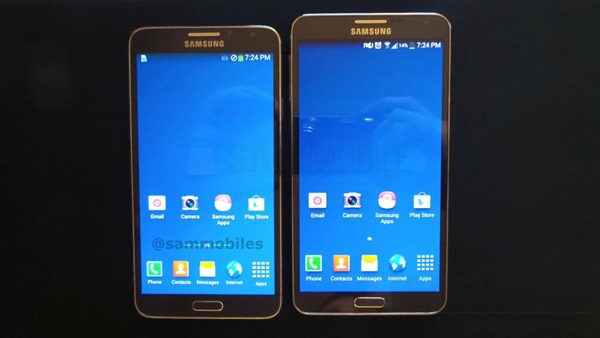 Samsung never seems to take a break from releasing new smartphones, but although we’re expecting another deluge of assorted models to arrive at some point this year, it’s hard to look beyond the Galaxy S5 and Note 4 in terms of handsets we’re actually interested in. We’ll keep you posted on any info regarding these two titans – as well as the Galaxy Note Neo – so be sure to stay tuned to our coverage here at Redmond Pie!