For anyone who regularly opens up Cydia and refreshes the repositories to see the most recent additions and available updates, it won’t come as a surprise that each day seems to bring a new Siri-based tweak or enhancement. When the iPhone 4S was launched, Siri was one of the driving forces behind said device, making it such a consumer success and helped Apple to announce record first day sales, as well as posting record breaking financials for the final quarter of 2011.

You only need to look at how many people purchased a 4S purely for Siri, as well as the massive amount of people who are downloading the Spire tweak from Cydia in order to use Siri on an older, unsupported device. People are even paying a monthly amount for accessing proxy servers to allow them to use Siri on an iPhone 4 or 3GS which shows just how Siri-mad the iPhone using world has become.

Siri is a powerful addition to any iPhone right out of the box, but the jailbreak community has proved through the release of additional modifications that Siri can be enhanced to provide a better all-round user experience, which in time we will no doubt see Apple adopt some of the community’s enhancements.

On a stock installation, when Siri is launched the current screen slides up to reveal a Siri bar at the bottom of the screen which is very similar to launching the multitasking switcher tray. Siri then becomes ready to accept a user’s voice commands which then forces the interface to go full-screen. This normally wouldn’t be an issue, but on older devices which are running the Spire tweak from Cydia users have reported that this operating method causes a slight annoying lag. Although the lag isn’t really service affecting, it can become quite annoying and detracts from what should be a seamless user experience. 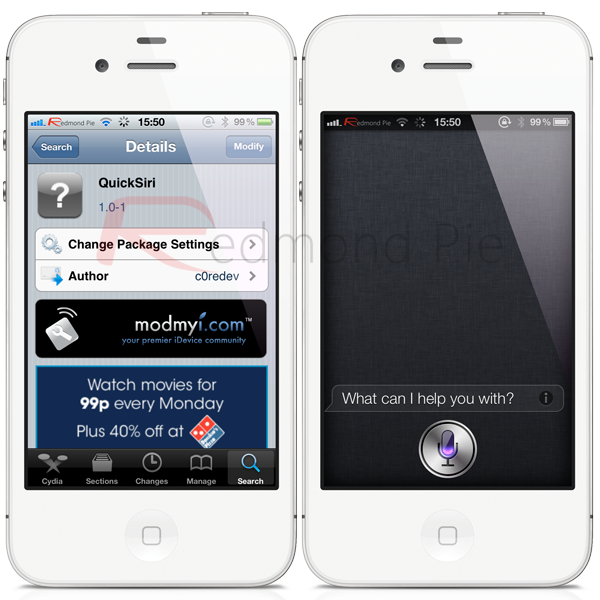 Developer c0redev has released his QuickSiri tweak which requires iOS 5 and lets users invoke Siri in full-screen mode immediately without the need for the first voice command to be given to the smaller Siri bar at the bottom of the screen. Forcing this full-screen operation from the beginning makes Siri work a lot faster and effectively removes the reported glitch/lag that users have been complaining about when running Spire on older generation devices. The tweak is simplistic in its approach in that it doesn’t offer any settings entries, but exists purely to make Siri full-screen when invoked by the user.

The developer has stated that a future update of QuickSiri will allow users to entirely disable the help bar which forms part of the Siri graphical user interface, or alternatively move it to the top of the Siri interface should they require it.

QuickSiri is available to download on the ModMyi repository free of charge and requires a Siri capable device running iOS 5.