From First iPhone To 6s, All Models Put To One 10-Phone Water Resistance Test

We’ve seen people do some crazy things with new gadgets and technology to prove a point. With every release of a new iPhone we will inevitably see videos of the device being dropped from various heights to test how it handles that level of collision with concrete. We’ve even seen Apple’s hardware subjected to liquid nitrogen and a sledgehammer, as well as being shot with an extremely high-powered rifle. Now, thanks to a new video, we get a good look at every generation of Apple’s iPhone being submerged in water to test their ability to survive.

The topic of whether or not the latest iOS powered smartphones are waterproof has come up relatively recently. Not long after the iPhone 6s and iPhone 6s Plus were launched to the public, we discovered that Apple had quietly added some sort of waterproofing capabilities to the hardware without actually making a song and dance about it. This relative silence on the subject could be because it doesn’t actually conform to any official waterproofing standard, but rather just adds a level of protection to the hardware in case a device becomes momentarily wet or is dropped into water. 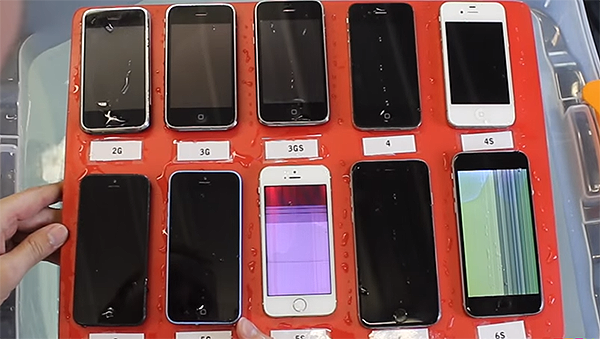 It’s common knowledge that Apple doesn’t publicly claim or market its iPhones to be waterproof, but that is where this video steps in by taking the original iPhone, the iPhone 3G, the iPhone 3GS, the iPhone 4, the iPhone 4s, the iPhone 5, the iPhone 5c, the iPhone 5s, the iPhone 6, and the iPhone 6s, and gluing them all onto a flat board, and submerging them into a pool of water to test the results. It’s an expensive way of effectively proving what we already know about Apple’s iOS devices; that water simply does not agree with the majority of them.

With that said, the results are actually fairly interesting, and surprising in a sense. It’s already been proven that the iPhone 6s and 6s Plus can be submerged in water for a period of time without any issues propping up, yet it was the iPhone 3GS from 2009 that managed to survive the longest before succumbing to the destructive nature of the water. In the end, all of the ten devices weren’t capable of remaining in fully working order after some time of being placed underwater. So what lessons can we take away from this? That’s relatively simple; if and till Apple doesn’t market the iPhone as being waterproof, don’t get too confident about its waterproofing abilities.