Using Android over other mobile operating systems draws many advantages, and as well as widgets, home screen alternatives and open source apps, the true multitasking is another feature setting it apart from the likes of iOS. With this in mind, XDA-Developers member and Android developer Mohammed_Adib has coded a beautiful app for Google’s OS called Floating Stickies, which allows one to create floating, Post-It like notes at will. Said notes can be moved, resized, deleted or docked with ease, and the whole concept means one can easily make notes without deviating from whatever task is at hand. More details below.

The likes of Samsung and Sony have been very swift in their implementation of floating apps, and Floating Stickies looks and feels almost identical to the note-taking app of the latter. Indeed, the whole idea feels like it was originally copied from Microsoft, and those Windows Sticky Notes, and although the larger displays will ultimately benefit more than those of 4-inches and below, it’s the kind of app everybody would probably consult from time to time.

The notepads are of multiple colors, which is useful in that if space constraints require you to overlap them at any point, you can easily distinguish one – which may have a list of groceries jotted on them, from another – which could, for example, contain a couple of reminders. 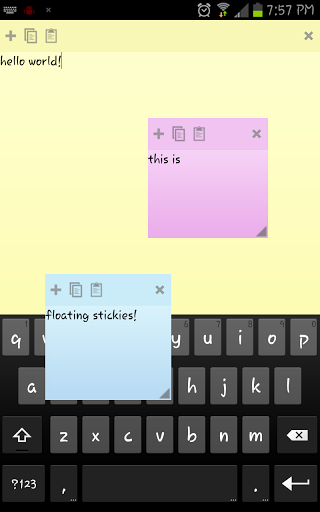 Floating Stickies are also a great way for you to visualize your clipboard, and copy several words or phrases from a page or passage at any given point. When you’ve finished note-taking, an app notification appears in the drop-down menu, from which you can easily save and close all of your notepads. 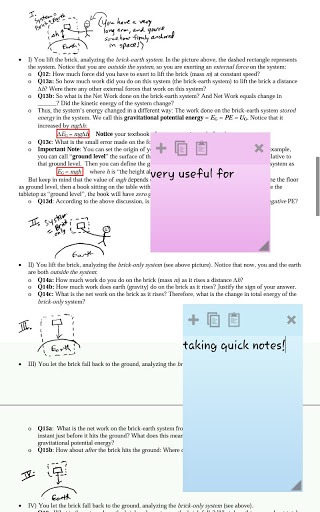 It’s a novel idea for an app, and considering the Play Store boasts ~700,000 entries and growing, this is one of those that everybody should download and install incase a brainwave or important activity needs to quickly and conveniently be jotted down. 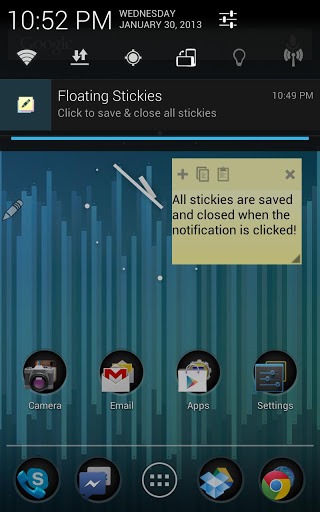 It requires Android 2.3 and up, and if your device meets those requirements, I highly recommend you pick Floating Stickies up via the link provided below. And yes, it’s free of charge.

(Source: Floating Stickies For Android on the Play Store)