How To Fix Common iOS 11 Bugs And Problems

Here how to fix iOS 11 bugs, issues and problems that you might be facing after updating your iPhone or iPad to latest firmware version.

Have you excitedly installed iOS 11 on your iPhone or iPad only to find out that you are experiencing one or more issues or niggles with that installation? Carry on reading to to see our highlights of iOS 11 issues and how you can fix some of the most commonly experienced problems. 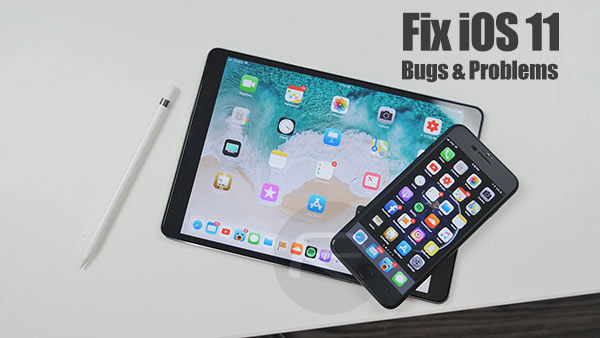 Bluetooth Not Working: You may not actually realize that you use Bluetooth as much as you do until it’s actually malfunctioning or not working as expected. It then becomes increasingly annoying. Some changes in iOS 11, such as complete revamp of Control Center, means Bluetooth now works differently in some parts of iOS.

If you are experiencing Bluetooth issues then you can troubleshoot any Bluetooth niggles below:

Wi-Fi Issues: Certain device owners have been complaining of dropping wireless connections, or even worse, connections that look to be solid and stable but simply don’t provide the level of performance that one has been used to. Check out the link below for more information.

Battery Life Troubles: This is always an area of contention when a new version of iOS is released. Device owners religiously monitor the impact that it has on the received battery life of the device. If you have been noticing that your battery isn’t lasting as long as you believe it should then visit link below for some advice.

iMessage, FaceTime, and Handoff: We aren’t exactly sure how many people use the Handoff feature between iOS and macOS on a daily or recurring basis, but we are sure that FaceTime and iMessage are extremely important parts of the iPhone and iPad experience. If they aren’t working correctly, then it can impact the whole experience. As these are all iCloud features, you can typically solve all in one fell swoop.

Lag: Whenever a new version of iOS is released, there is always the fear that it is going to have a detrimental effect on the performance of a device. Especially older supported hardware, which in this instance would be phones like Apple’s iPhone 5s. If you are experiencing some lag, then worry not as it’s likely solvable.

OTA Update Issues: Sometimes you can’t even get into the latest version of iOS to experience some of the issues other individuals are having. If you are struggling to get past the install of OTA update, and the install appears to just be stagnant or stuck at “Preparing Update,” then you can quite easily resolve that issue.

Cannot Connect to App Store Error: The App Store is where you need to be if you want to download all of the new apps offered for iOS 11, including those wonderful ARKit-based apps. It’s where you will need to be as soon as the App Store badge is appended with an insanely high number to show that all of your existing apps have been updated to offer iOS 11 support. With iOS 11 getting completely revamp of App Store, it now introduces some niggles here are there, but they are easily fixable:

Warming/Heating Up Of Device: This issue is likely a huge concern for a lot of device owners, especially considering the Galaxy Note 7 debacle which initially heated up before actually exploding. There’s no suggesting that an iOS 11 device is going to combust in front of your eyes, but if it’s heating up for more than 24-48 hours then you may need to act.

Slowing Down Of Device: Even if you aren’t experiencing very specific bugs with iOS 11, you could still be having issues where the device is just significantly slower than it used to be. You can learn more about this here:

Home Button Delay: An annoying issue in iOS 11 makes a slight pause after Home button is clicked before taking the required action, which is to go back to the Home screen. You can find more detail on this at: