Up and coming social network Google+ is being targeted by cybercriminals in a invite-based scam, Redmond Pie has learned.

The reason behind targeting Google+ is because of the hype that currently surrounds the network. People are trying their best to get into + because of some its innovative features like +Circles and +Hangouts which we’ve talked about, in detail, here.

The surprising thing about the scam is how Google+ hasn’t even opened up for everyone yet!

The scam works by sending people highly authentic-looking + invites. The formatting is accurate down to the very last pixel! Even the email address from which the emails are sent look legit. The emails look exactly like the actual invites.

It’s enough to make even the most knowledgeable of computer enthusiasts click through:

If the invitee does, in fact, click through, they are taken to a “Canadian Family Pharmacy” website where they may order Vi@gra, Cialis or Levitra pills to supercharge their se*ytime. 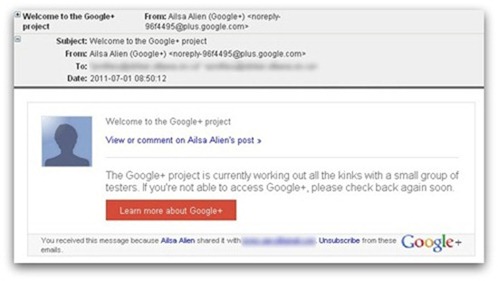 In what may very well be the first major cybercriminal campaign exploiting the Google+ brand, spammers are sending out bogus Google+ invitations that in reality point to online pharmacies.

The messages look similar to the real emails that users may receive from friends who are already members of Google+.

However, clicking on the links will not take you to the new social network, but instead take you to a pharmacy website set up to sell the likes of Viagra, Cialis and Levitra to the unwary. In the case of the site shown below, they even have a special July 4th promotion – just in case you were hoping for additional fireworks on the night.

It’s really quite hard for us to imagine why anyone looking for Google + invite would end up buying Vi@gra pills after being redirected to a pharmacy website, but these scams have existed for a long, long time.. so there has to be people who actually go ahead with the order.

Google+ was announced on 29th June. Response to the network so far has been mixed so far with one group of people lauding the service for its modern, privacy-centric features (+Circles is brilliant!) and the other simply going stating that + doesn’t solve any problems for them and that they are happy with Facebook and Twitter.

If you haven’t tried the service yet, give it a go by asking your friends for an invite.