Everyone loves a good speed test video, and whenever a new flagship smartphone is released, YouTube is flooded with new videos showing how the latest and greatest device compares with the one that it just replaced. What we don’t usually get to see though is a video showing the new hotness compared with every device that came before it.

That’s why this new video shared via 9to5Mac is so interesting, because not only does it pit the iPhone 5s and iPhone 5c against the iPhone 5, but it also throws in the 4s, 4, 3GS, 3G and original iPhone for good measure.

In a test that could only be done using a widescreen video recorder and monitor, a full eight iPhones are side-by-side and being put through their paces by a collection of hands and fingers that we presume don’t all belong to one person! If they do, then we’d rather see them on camera, really. 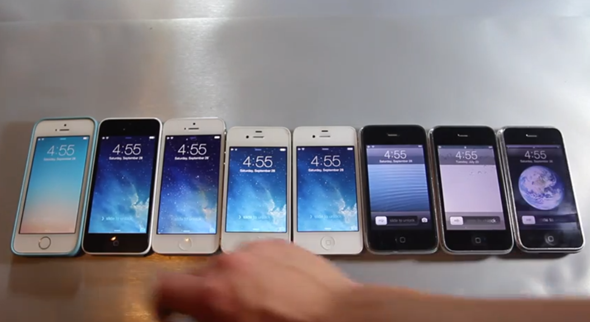 While there are no surprises to be had from the video, it’s interesting to see just how much faster than the original iPhone the iPhone 5s is when it comes to some tasks, particularly web browsing. In a day and age where we are growing so used to having very powerful computers in our pockets at all times, it’s often easy to forget what things were like when the iPhone first put in an appearance in 2007.

At the time though, we were all too busy marveling at what was possible with a touch screen, and of course everything is relative in this game. In a few years we’ll no doubt be pointing fingers at the iPhone 5s and Samsung Galaxy S4 while wondering how we ever used them. Until then though, let’s just be pleased with what he have.

The full video is only three minutes long, so if you’ve got the time it takes to make a cup of coffee spare then sit down and give it a watch. There are worse ways to spend three minutes on the internet these days.