Yesterday, Apple released their newest and hottest smartphone to people who had queued up all over the world. And if there is one company that is jealous at launch of a new product from Apple, it’s Samsung. The Galaxy S4 is without a doubt one of the best smartphones to become available in the year 2013, and is likely to be the biggest competitor to the iPhone 5s, and vice versa, of course.

It seems fit to put iPhone 5s and Galaxy S4 through a rigorous comparison to see which one actually comes out on top. We’ve already covered the physical hardware and build quality of each of these devices (see: ‘UPDATE x2’ below), and compared them both to the hardware king of the Android world: the HTC One, so we will mainly be focusing on software and general usage in this comparison. If you are making the choice about which smartphone to buy, the video below should help you make a validated opinion:

It’s fair to say that this comparison will be most helpful to people who are on an even standpoint on the whole ‘Android vs. iOS’ debate. If you’re already heavily invested into either the Apple ecosystem, or the Google Play Store, it may make sense to stick with that platform. The choice between these smartphones can only be quantified so much, and there are aspects you’ll have to assess before making the decision to purchase one or the other. Do you feel comfortable using a 5-inch screen? Is a 4-inch screen too small? Do I need the addition of a user-replaceable battery that the Samsung Galaxy S4 offers? These are all questions you need to ask yourself, as the answers will significantly differ from one person to the other. 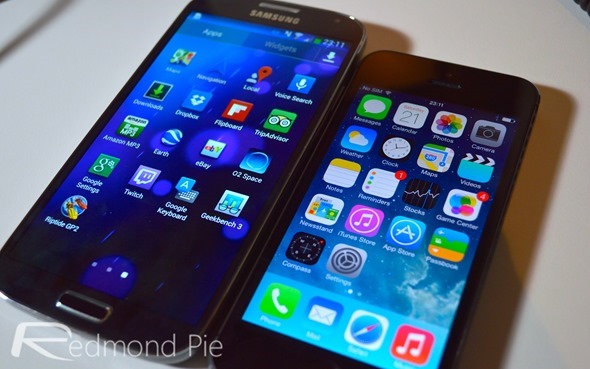 Personally, my current daily driver remains the HTC One. The Samsung Galaxy S4’s build quality just isn’t there for me to make the switch to it. But If I have to pick between the iPhone 5s and Galaxy S4, I will definitely go for the new iPhone. It’s down to personal preference in the end. A comparison video like this should help a lot of you who are looking to buy a new smartphone.

UPDATE x1: We realize that browser webpage loading speed test in the video was unfair to iPhone 5s as we tested it on iPhone’s Chrome (which is mostly crippled due to restrictions for third party browsers on iOS) vs Android’s Chrome on GS4. We will do another video tomorrow showing browser test in detail with Safari on iPhone 5s which makes use of Apple’s Nitro JavaScript Engine.

UPDATE x2: Those of you asking for a physical hardware comparison of the two, here it is: