Download links for both watchOS 3 beta 1 and tvOS 10 beta 1 are now live for developers to download and install on their Apple Watch and fourth-generation Apple TV. We can remember a time when Apple only had a couple of platform announcements to introduce during its annual Worldwide Developers Conference. Once upon a time, there was just the next-generation of iOS to introduce along with the next major version of macOS, the platform that powers Apple’s Mac range of computers.

Those days are long gone, and now that the company has additional product lines with so much more to announce. This in turn gives developers so much more to sink their teeth into immediately after the opening keynote. 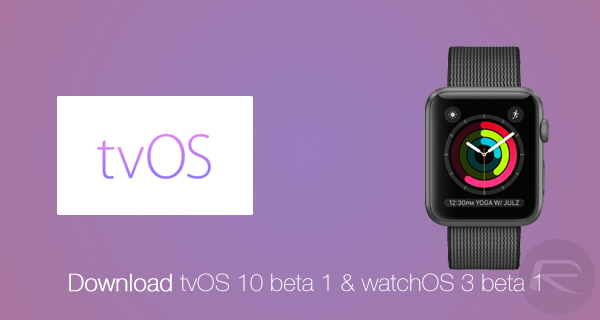 To that end, following on from earlier announcements, Apple has officially made the first pre-release beta 1 seeds of watchOS 3 for Apple Watch and tvOS 10 for Apple TV available to download and test for those with the necessary privileges.

By necessary privileges, we mean developers who are registered and enrolled members of the Apple Developer Program. Those developers will not only be looking to test the reliability and stability of the two platforms, but also utilize new technologies to ensure that they have cutting-edge apps available for the public release later this year.

From a compatibility perspective, it’s worth mentioning that Apple TV owners needn’t get exited unless it’s a new fourth-generation set-top box that they are running. tvOS 10 is the firmware that powers the latest Apple TV 4, meaning that it can only be installed on those particular devices. Earlier models will continue to tick along with incremental firmware updates as and when Apple sees fit, but they aren’t capable of installing tvOS and running the underlying App Store that makes it such an appealing product. watchOS 3, as you might have guessed, is compatible with Apple’s only wearable to date.

Developers who are interested in getting to grips with the latest watchOS and tvOS experience can do so by downloading and installing the beta 1 firmware files for the relevant platform. Of course, as is always the case, Apple has made these downloads available through developer.apple.com, where developers will be invited to sign-in using their registered Apple ID.

From a general availability perspective, we expect both platforms to go live to the public in September alongside the launch of iOS 10.