And the wait is finally over. Apple’s macOS Sierra version 10.12 beta 1 is now live and available to download and install for developers. Those of you who are enrolled and registered on Apple Developer Program portal can instantly grab the latest beta version of desktop OS from Apple right now. As for those testers registered on the free Apple Public Beta Program, the company has also confirmed that macOS Sierra will be available to public testers sometime next month in July. We’ll obviously let you know as soon as the the public beta goes live for download.

Following the rumors that Apple could change the name of its desktop OS, we now have official confirmation from Apple, and so can start referring to company’s desktop OS as macOS instead of OS X. Part of this announcement at the WWDC 2016 also includes macOS Sierra beta 1 being made available to download and interact with. 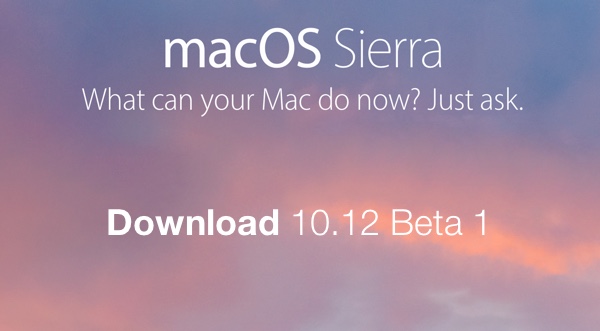 When people say that you “can’t please all the people all the time”, it’s most definitely true. Apple may have chosen to scrap the “OS X” naming convention in favor of a more converged “macOS”, but the release doesn’t appear to be the huge overhaul that some people had hoped for prior to this announcement. Yes there are some notable additions, like Siri making its debut on desktop, but not a lot has changed in terms of overall interface. With that said, macOS definitely does build on the foundation that’s been laid in place with the last couple of major versions of Apple’s desktop platform, and for that we can be thankful.

Developers looking to grab the beta release of macOS Sierra 10.12 need to be registered and enrolled member of the Apple Developer Program at developer.apple.com.

As for compatibility, most modern Macs, including the iMac, MacBook, MacBook Pro, MacBook Air, Mac mini, and Mac Pro, are capable of installing and executing the latest macOS. For full compatibility, check: List Of macOS Sierra 10.12 Compatible Macs.

As for when the final version will be made available? Apple generally has a habit of releasing new versions of its desktop platform alongside the public release of the latest version of iOS. To that end, we’re expecting Apple’s new iPhone 7 to drop in late September, which will be the first device to ship with iOS 10. It’s reasonable to assume that Apple will release the final version of macOS Sierra to public at the same time.

Until then, sit back, put your feet up, and enjoy the beta ride that will inevitably see multiple pre-release seeds hit the airwaves over the next few months before we get that final public release somewhere in September.