The very final versions of Visual Studio 2013, .NET 4.5.1, and Team Foundation Server 2013 are now available to download for those tethered to Microsoft’s MSDN dev network. With Windows 8.1 now making its grand entrance, the Redmond company is currently working to ensure the majority of its product line is brought up to speed, and if you are an MSDN Subscriber, you can now grab these new releases from the MSDN Subscriber Downloads page.

Although the big release of Windows 8.1 continues to dominate the headlines, tools like Visual Studio 2013 are essential to the whole ecosystem in general. After all, with a multitude of tools enabling developers to create apps across the entire Windows 8.x product family, developers can test and build perfectly tailored services for all, and thankfully, Microsoft has been fairly prompt with these dev releases.

As far as changes go, the updates and improvements are largely focused on Microsoft’s transcendence towards the cloud. There has been much talk but notably less action as the software maker pushes on with its Cloud OS ambitions, and Visual Studio 2013 is naturally a big part of this. As such, Visual Studio 2013 now lets developers create dynamic apps that can fully utilize the cloud in numerous ways, and this should, in turn, make it a great deal easier for developers to keep in sync with the fast-moving pace of the market.

Major changes, according to the official blog post over on MSDN, include “innovative editor enhancements such as Peek and CodeLens” as well as a number of diagnostics aiding UI responsiveness and power consumption. 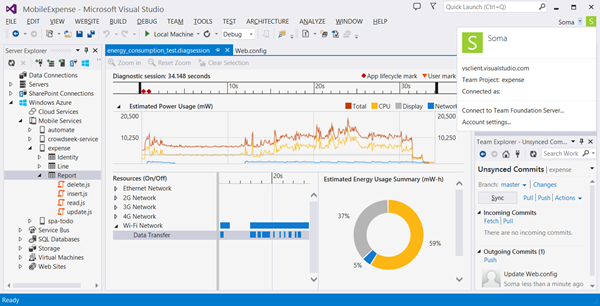 Of course, the best way to fully digest and appreciate a new piece of software is to go ahead and download it, so if you’re an MSDN Subscriber, you can go ahead and check out the new Visual Studio 2013, .NET 4.5.1, and Team Foundation Server 2013.

Windows 8.1 sees Microsoft take a partial step back in terms of some of its features, but with plenty of new and exciting implementations, it’s still a very progressive release that far exceeds the incremental connotations of a “.1” update. With Windows 8 having had its fair share of issues, Windows 8.1 seems an altogether more user-friendly experience, and Microsoft will be hoping this latest batch of software releases not only helps to consolidate Windows’s position as a key player, but also sees the mobile arm gain a little more strength than it has managed thus far.

You can grab all the bits from the official Microsoft link.