Download: Samsung Galaxy S7 Wallpapers Leaked, Get Them All For Any Device

Consumer tech companies like Apple and Samsung are finding it increasingly difficult to keep new products and innovations under wraps prior to any official announcement. It seems that there’s rarely a new flagship device that makes it to market without the majority of us having a fairly accurate insight and understanding of what’s to come before the company even unveils it. Samsung currently finds itself in that position ahead of the imminent Galaxy S7 and S7 Edge unveiling later this month, so it certainly won’t please the South Korean company to learn that all of the official stock wallpapers from the device have also leaked, and are available to download right now.

The Samsung Unpacked event may be happening later this month, but we already know pretty much everything that is going to be announced. In fact, we’ve not only heard in great detail about the underlying technical specification of the Galaxy S7 and S7 Edge models, but only yesterday we got an actual look at some photographs of the devices. Following up on that, we can now actually download all of the official wallpapers that Samsung intends on pushing out with the Galaxy S7 and S7 Edge phones when they finally roll out to the public.

Wallpapers pulled directly from a device may not be everyone’s idea of excitement, but for those that do love a good leak prior to an official launch then there are thirteen backgrounds in total to be had. There’s no “official” word that these are the exact images that will ship with the Galaxy S7 hardware next month, but there’s a real familiarity with them and wallpapers from the Galaxy S6/S6 Edge, meaning that they definitely look like something that Samsung would create and market along with the newest smartphone. There are the usual blue gradients, entertaining abstract shapes and fine lines that Samsung has become known for highlighting on the AMOLED displays of its recent Galaxy S-branded hardware. All of the wallpapers up for the grabs are offered in a 2560 x 2560 pixels resolution. 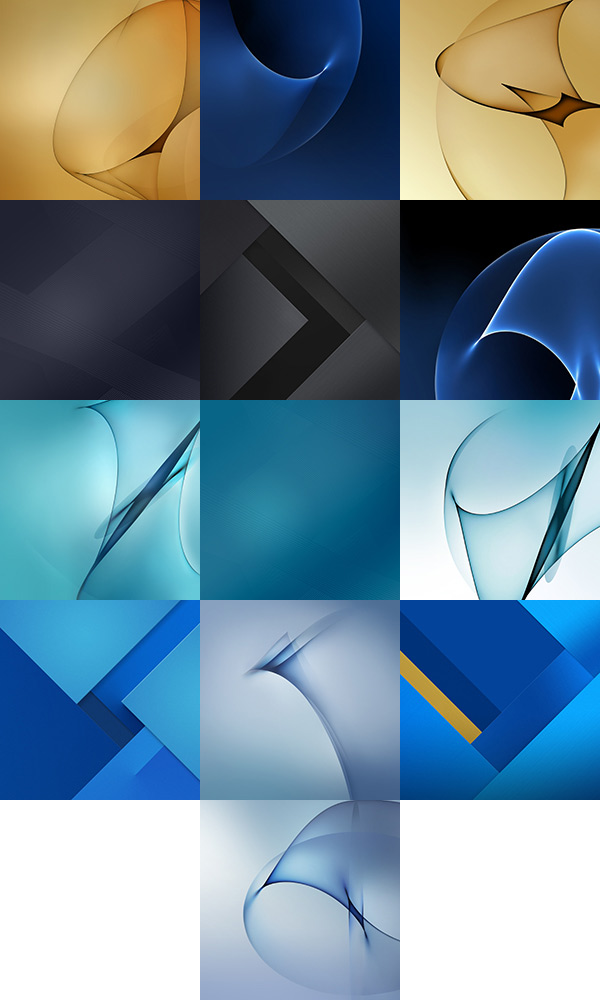 The availability of these images, along with the fact that we pretty much know everything there is to know about the upcoming models isn’t going to remove any excitement that’s being associated with the reveal. Samsung finds itself consistently at the top of the smartphone food chain for a reason, and it’s likely that the introduction of the Galaxy S7 and S7 Edge will capture the Android audience attention once again. For now though, head over to the download link below to easily grab all of the wallpapers that we have packed in as a single download.