Apple has just released bash updates for OS X 10.9 Mavericks, OS X 10.8 Mountain Lion and OS X 10.7 Lion. These can be downloaded and installed by all users concerned by the well-documented Shellshock vulnerability, which has caused quite the stir over the past few days. We’ve all of the details, along with those all-important download links, right here.

The days of Mac users enjoying almost complete immunity from major bugs and malicious intrusion are long gone, and the times when Apple could boast that its computing line-up weren’t susceptible to “PC Viruses” are also well and truly behind us. After Heartbleed’s marring of the “safe haven” vibe that had enveloped the Mac community over the years, the appropriately-named Shellshock has proved another bucket of cold water, and despite the amount of strain that the Apple software development team has been put under during the past couple of weeks what with iOS 8, it’s good to see that the iTunes maker has taken this one very seriously. 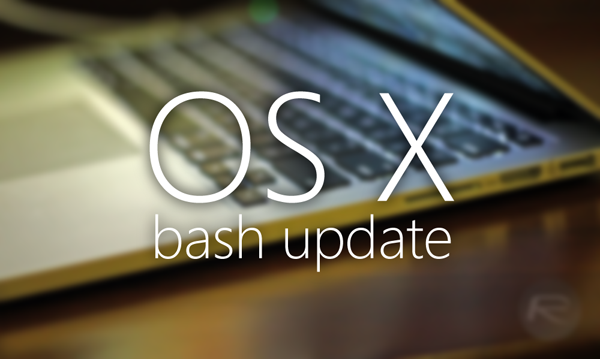 The updates, which fix the long-standing security flaw found in the bash UNIX shell, are ready to download and install, although their patching qualities will also likely be baked into the next Software Update.

It’s worth noting that while those on Lion, Mountain Lion and the current Mavericks are covered, there’s no support as yet for those running OS X 10.10 Yosemite in any capacity. So if your machine happens to be running a Developer Preview or Public Beta of the upcoming update, you’re still theoretically at risk, although as we close in on an October month that will apparently see Yosemite finally hit the Mac App Store, those eager early adopters shouldn’t be left exposed for too long.

Despite the vulnerability potentially allows a hacker to gain remote and complete access to a targeted OS X machine, it has hitherto only affected a small number of users, and with Apple swiftly stepping out to make note of the seriousness of bash / Shellshock a few days back, the company has been equally quick to the draw with the remedial update.

If you’re a Mac user – one who doesn’t happen to be running a DP or Beta of Yosemite – then you can download the bash updates right now via the links provided below.