Prior to the final versions being made available, all three platforms had five beta releases for testers to provide some important feedback. The release possibly marks the end of the road for the macOS Sierra, watchOS 3, and tvOS 10 as we have come to know them, as Apple looks to come out all guns blazing with macOS 10.13 High Sierra, watchOS 4, and tvOS 11 somewhere in September. For now though, let’s take a look at what has changed with the final versions of all three OS’. 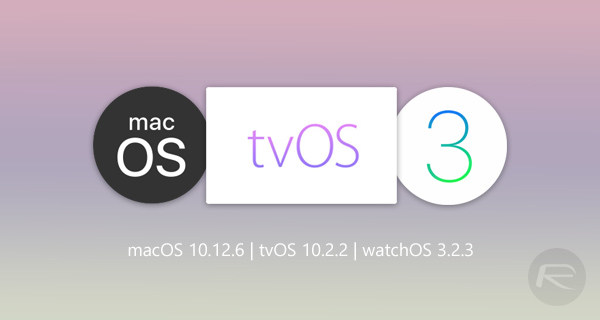 macOS 10.12.6: The final version of macOS 10.12.6 doesn’t seem as important now that Apple has introduced macOS 10.13 High Sierra, but it’s here, and it’s definitely worth a download for all compatible Mac hardware. With macOS 10.13 on the agenda, this update isn’t exactly the most exciting, but it does come with a number of internal enhancements and under-the-hood improvements that should hopefully make the install a more pleasurable experience for all Mac owners.

This latest version of macOS is available right now as an over-the-air update via the Mac App Store.

watchOS 3.2.3: watchOS is one of Apple’s most exciting platforms at the moment. It certainly feels like a lot of care and attention is being put into ensuring that the platform which powers Apple Watch is as powerful and exciting as it can be. That attitude and determination to improve are reflected in watchOS 4, but it also shines through with this release. As part of an effort to improve and further stabilize the platform, watchOS 3.2.2 contains internal improvements and bug fixes.

watchOS 3.2.3 final version is available as an over-the-air update via the connected Watch app on companion iPhone. The Apple Watch will need to have at least 50% power and be connected to a power source during the download and installation.

tvOS 10.2.2: It was a little disappointing to not see a dramatically improved version of tvOS announced at this year’s WWDC, but it’s also a positive to see Apple continuing to progress what is already in place as part of an effort to ensure that it’s stable and reliable as it possibly can be for all fourth-generation Apple TV owners. The platform has progressed dramatically over the last twelve months, with this latest release bringing additional bug fixes and under-the-hood improvements.

tvOS 10.2.2 can be downloaded as an over-the-air update through the Settings area of the Apple TV. Details on how to go about doing that can be found here: How To Install tvOS OTA Update On Apple TV 4.

These updates may not exactly be the most exciting and may seem a little insignificant considering we are now witnessing new major versions of the firmware after WWDC, but it’s still great to see progression taking place.