Microsoft’s Xbox One X is definitely the hottest ticket in town when it comes to the world of gaming, although we suspect the folks over at Nintendo may argue that point given the impressive sales numbers the Switch continues to post.

Still, if you want 4K gaming, then the Xbox One X is where it’s at right now, and if you want to pick one up, then Amazon is the place to start looking. The online retail giant has a few offers on the go right now, but one of them in particular is worth checking out.

At the time of writing, if you buy an Xbox One X at its normal price, you will be given a free $50 Amazon voucher, which, on its own, is a pretty sweet deal. Things get better, though, because if you also add a 3-month Xbox Live membership to your order, then you can save $10 on that, too. All in all, for just $515, you can get your hands on a brand new Xbox One X, a 3-month subscription to Xbox Live, and a $50 Amazon voucher. You can’t say fairer than that, can you? 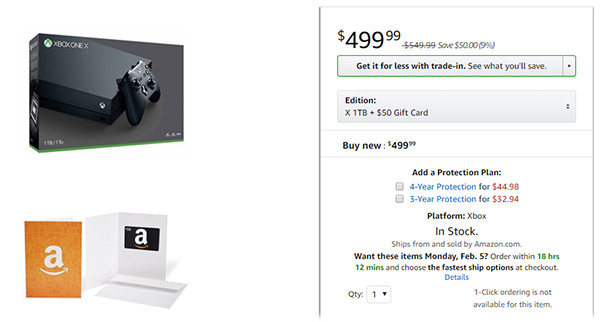 Amazon has offers like this every once in a while, so even if you are not on the trail of a new Xbox One X right now, it’s well worth keeping an eye out for similar deals in the future.