Cydia 1.1.30 Released: What’s New And How To Update Right Now

Saurik has released Cydia Installer 1.1.30 / 1.1.29 today. Here’s what’s new and how to update to it right now on your jailbroken iPhone, iPad or iPod touch devices running iOS 10.

Today’s release of version 1.1.29 however brings more bug fixes and under-the-hood performance improvements than anything else, and doesn’t really pack any new user-facing features.

According to the changelog, Cydia 1.1.29 corrects package catalog loading, improves package catalog sorting performance, avoids downloading translation files that will fail or are slow to load, and more.

Full detailed official changelog of Cydia 1.1.29 is as follows:

As for how to update to this latest version of Cydia Installer, when in jailbreak mode, fire up Cydia on your jailbroken iPhone or iPad device and then tap on Changes tab on the tabbed bar at the very bottom of the user interface. Now tap on Refresh button location on top left of the interface and wait for it to reload all the latest available packages. Cydia will likely now offer you an Essential Upgrade prompt. If you get this prompt, simply tap on Complete Upgrade to get onto the latest version of Cydia Installer.

Update x1: Shortly after releasing Cydia 1.1.29, Saurik dropped Cydia 1.1.30 which basically contains all the changes from 1.1.29, along with fix for showstopper bug of unable to install purchased items from Cydia in 1.1.29. 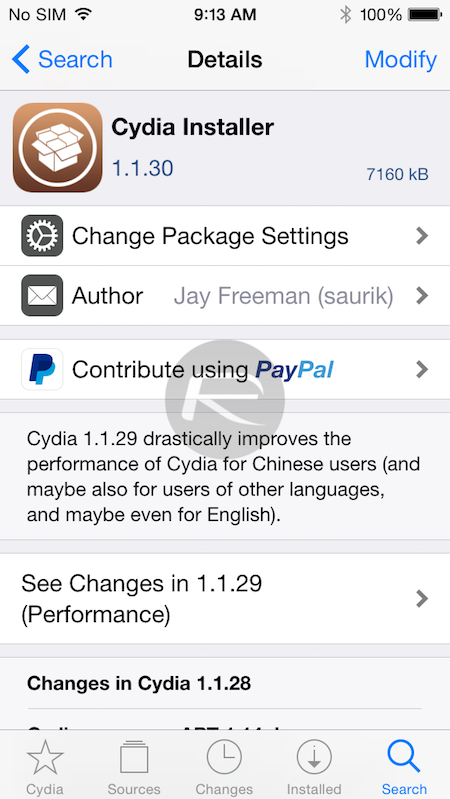