An unprecedented, unexpected, and continued rise in the global price of Bitcoin has caused a surge in downloads of the Coinbase digital wallet app which allows an account holder to purchase and store digital currencies.

The value of Bitcoin has been rising exponentially over the last seven days, breaching the $18,000 barrier at one point. That rise has caused Coinbase to become the number one downloaded app in the United States as the public gets onboard the cryptocurrency bandwagon.

When you look at the top ranking apps on the App Store, either free, paid, or top grossing, you very quickly get used to seeing the same names appearing week-after-week, month-after-month. The top charts are generally dominated by popular social apps like Instagram, Facebook, and WhatsApp, with the top grossing apps usually being popular games with high in-app purchase offerings.

However, right now, as noted by Recode, Coinbase has risen from the 400th most downloaded app in the U.S. App Store to become the number one most popular app as it stands right now.

Coinbase may currently be the darling of the cryptocurrency world as far as purchasing and storing is concerned but we’ve already seen how easy it is for companies to quickly fall off that pedestal. 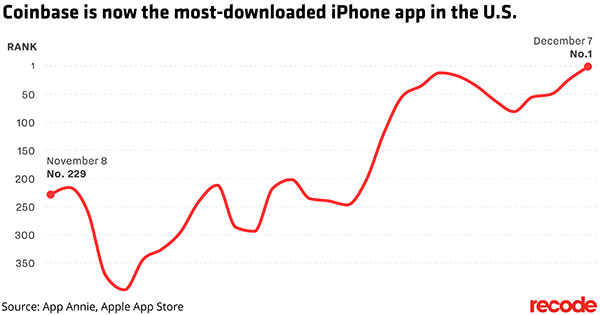 Coinbase has recently been having issues keeping up with the demand being placed on its servers and has regularly suspended trading of Bitcoin, Litecoin, and Etherium over the last few days, but those issues are nothing compared to the current predicament Slovenia-based NiceHash finds itself it. The marketplace was recently hacked, losing approximately $64 million of Bitcoin.

That security breach allowed the perpetrators to leave with approximately 4,700 Bitcoin, which is terrible news for those affected but doesn’t seem to have done too much to affect the global interest in Bitcoin and cryptocurrencies in general. If you want to see what all of the fuss is about, or just want to throw some of your hard-earned money into the cryptocurrency arena, then you can download Coinbase for free right now from the iOS App Store.