Sometimes technology can be used for good, and other times it can be used for evil. The development and inclusion of the Siri intelligent voice assistant on the iPhone 4S is an example of how technological advancements can be a good thing and no matter what a user’s personal opinion of Siri is, we must all agree that is represents an exciting future for human mobile interaction. With that in mind, developers involved in the jailbreak community also have the ability to modify Siri behavior, making her dance to the beat of their drum, which isn’t always a good thing.

In the early days of jailbreaking, the release of quality tweaks and extensions was a regular occurrence. This could largely be attributed to the fact that iOS had a number of areas which needed work and areas where developers could see an opportunity to improve or enhance. As is the case with most things, as time progresses and a saturation point is drawing closer, it becomes increasingly difficult to come up with modifications which provide any real benefit to users. That could be one of the main reasons why we are seeing a large number of Siri and Notification Center tweaks hitting Cydia, some of which are excellent pieces of work, others which are not so good.

For those among us who have been regular internet users of the last few years, you will probably remember the small period of time when the world wide web was going crazy after Chuck Norris, with websites popping up all over the place dedicated to providing humorous Chuck Norris ‘facts’. The facts were all designed to paint the highly religious martial arts actor into cult hero status and most of them were comedic due to the fact that they bordered on the ridiculous. That time has been and gone, or so we thought, as an iOS developer has released a tweak for the AssistantExtensions framework which modifies the Siri assistant to spout out random so-called facts about Chuck Norris. 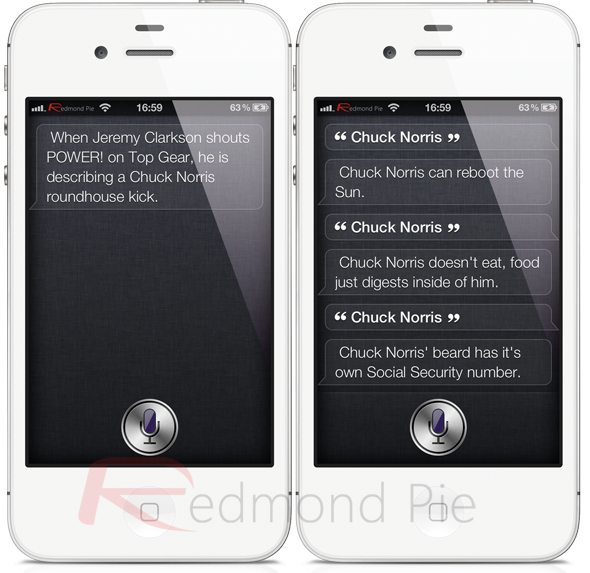 Chuck Norris Facts for Siri uses the Chatbot feature of the AssistantExtensions software to allow users to give voice commands to make Siri regurgitate from a list of pre-installed facts about the famous Texan actor. After installation, the command "let’s chat’ will activate the ChatBot feature, after which a user can then say "Chuck Norris", to be presented with one of the built in funnies that the tweak offers. The plugin relies on AssistantExtensions being installed and will not function without it.

The old saying of "just because it can be done, doesn’t mean it should be" comes to mind when I think about tweaks of this nature. Enough said. Chuck Norris Facts for ChatBot/Siri is available from the BigBoss repository as a free of charge download, requiring iOS 5 or above and a Siri-capable device.