When it comes to battery life, there are fewer things that are more important to the majority of people who carry smartphones around with them. Whether you’re the road warrior who goes from city to city without having access to fresh power, or the student who’s too busy partying to charge their tech, getting as many hours out of an iPhone as possible is paramount. When a new iPhone or version of iOS is released, battery life is always one of the biggest concerns going.

So with iOS 9.3.2 here, the obvious question that is on many people’s lips revolves around battery life, namely, will updating to iOS 9.3.2 from iOS 9.3.1 have a beneficial effect on how long someone can go between charges? Will it actually get worse? 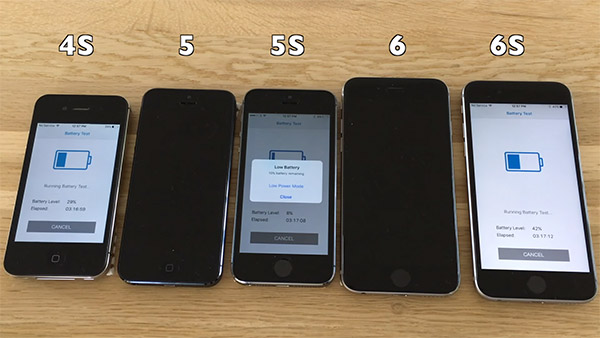 As ever, a video comparison has the answer. By taking a lot of iPhones and then running battery tests on them across both iOS 9.3.2 and iOS 9.3.1, a fairly comprehensive picture can be built up as to the battery potential that can be expected from any given iPhone.

The tests range from the iPhone 4s all the way up to the iPhone 6s and the results were captured on video for your delectation. Tests for each device took around 11 hours, but the video has mercifully been sped up so the whole thing lasts around 15 minutes. It makes for interesting watching, if you like that sort of thing, although the results are the most important thing here.

As for those results, predictably, the iPhone 6s fared best of all the iPhones tested. Those wondering which version of iOS fared best, the answer is that it depends on which device you are thinking of upgrading. When all is said and done, though, don’t expect huge differences here between iOS 9.3.2 and 9.3.1. You’re not going to get hours more battery life from a minor operating system upgrade unless there’s a massive bug to be squashed.

And there wasn’t. So that pretty much answers that.