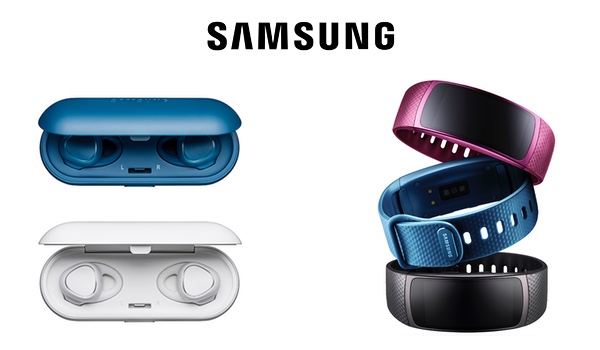 Gear Fit 2 is basically the successor to Gear Fit 1 which was released back in the year 2014. The second-generation Gear Fit comes with improved activity tracking and slicker design compared to the original model.

Specs wise, Gear Fit 2 features a 1.5-inch curved touch-screen Super AMOLED display with a resolution of 216 x 432 pixels, a built-in GPS chip, and is powered by 1GHz dual-core CPU, 512MB RAM, 4GB of internal storage, and 200mAh of battery. It is also IP68-certified for water-resistance.

In addition to all this, it also sports accelerometer, gyro, barometer, and a heart rate monitor. Like the original first-gen model, Gear Fit 2 also runs on Samsung’s own Tizen OS and can sync data to Samsung’s S Health app along with other third-party apps. Apart from all the fitness stuff, Gear Fit 2 can also display incoming notifications from a connected smartphone.

As mentioned earlier, Gear Fit 2 will be in stores on June 10th and will cost $179.99. It will come both in small and large sizes and will be available in black, blue, and pink color options. Here’s a video showing Gear Fit 2 in action.

Gear IconX is Samsung’s first truly wireless and smart earbuds. It’s smart because not only can it be used for listening to music from a connected device, it also has its own fitness tracking mechanism and hence can be used for fitness tracking, heart rate monitoring, and even as a standalone music player, thanks to the built-in 4GB of internal storage which can be used to store music.

The truly cord-free Gear IconX earbuds has its own accelerometer as well which can help it track distance, speed, and calories burned. The data can be synced to Samsung’s S Health app. There’s also a feature called Voice Guide which gives instant voice feedback on the progress of the ongoing workout or activity.

Gear IconX earbuds turn on automatically as soon as you wear them, and can be controlled using gestures on the built-in capacitive touchpad. When not in use, they can be kept in the included slick-looking carrying case which has its own built-in 315mAh battery and can be used to charge the earbuds on the go. Gear IconX on its own features 47mAh battery.

As mentioned earlier, Gear IconX will be available for $199 in Q3 2016 and comes in black, blue, and white colors.