As a company, Apple has been firmly stealing the world-wide headlines over the last few days. The company’s stock has fallen amid rumors of lack of demand for the iPhone 5, Exxon Mobile has reclaimed their position ahead of Apple as the world’s most valuable publicly-traded company and of course the late iconic co-founder of the company has been top of the discussions list thanks to the debuting of the jOBS biopic at the Sundance Festival in Utah. If you had any trepidation about Ashton Kutcher pulling off the Steve Jobs role, then the comparison picture tweeted from Kutcher’s official Twitter account should definitely lay those fears to rest.

The jOBS biopic has been written, filmed and produced by an indie team and therefore doesn’t carry the ‘official’ moniker that will likely be attached to the upcoming adaptation of Walter Isaacson’s Steve Jobs biography, but it has peaked the interest of those who loved and respected Apple, Pixar and NeXT’s co-founder. The story follows the life of Steve Jobs from 1971 until the year 2011, covering a lot of personal aspects of his progression from being a college dropout who sat in on calligraphy courses to being one of the most creative and respected entrepreneurs the world has ever seen.

We’ve seen various official picture releases from the movie of the course of it’s development. The majority of which show Ashton Kutcher taking on the Steve Jobs role in his younger days and managing to pull it off with a frightening likeness. However, the first picture to be tweeted by Kutcher himself after the movie debuted at the Sundance Festival is an amazing amalgamation of the real Jobs and Kutcher in the role. The picture is a recreation of one of Jobs’ most iconic pictures, where one half of the image is the real Steve Jobs and the other half is Ashton Kutcher playing his character.

The familiar black turtlenecks. The round rimmed glasses. The receding and thinning hairline. The greying beard and the thoughtful but extremely deliberate stare. Kutcher seems to have it all nailed down to almost perfection. Although the majority of us won’t get to see the movie until April 19th when it is released in theatres around the world, the general consensus from those that attended the Sundance is that it provides an extremely interesting and exhilarating – albeit exaggerated at times – look at the youth of one of the world’s greatest business minds. We can’t wait. 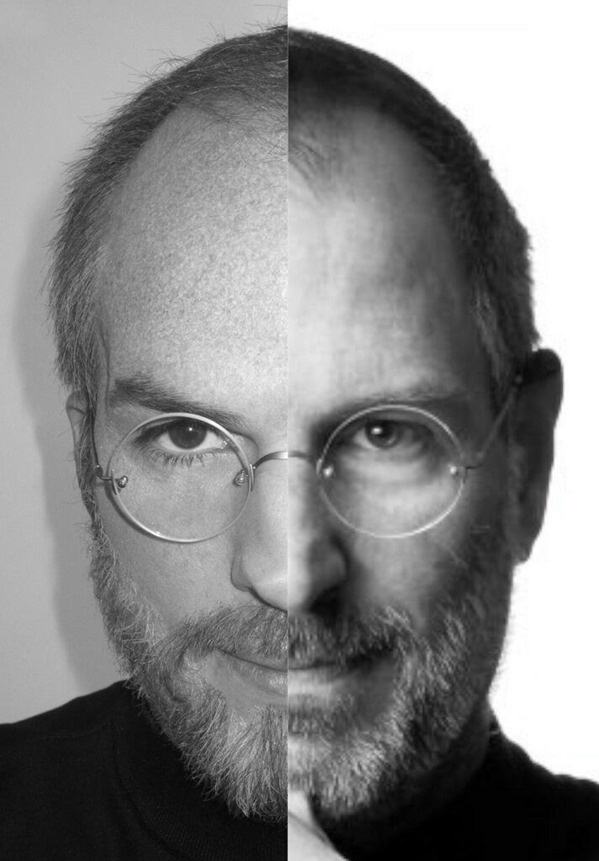