The iPhone 5 was a landmark release by Apple for a variety of reasons, and as well as finally breaking the mold of a 3.5-inch display, it was also the very first time in which the Cupertino included 4G LTE into one of its handsets. The iPad 3, which launched back in March of this year, was the very first Apple device to offer the next-gen cellular chip, and with the release of the sixth-gen smartphone just a couple of months ago, Apple’s LTE market share has gathered a little more steam – climbing to an impressive 27 percent.

The number is considerable given how short a shelf life Apple’s LTE products have had so far, but remains quite away behind main competitor Samsung, which commands a 40% share. While it may be the seventh quarter in a row in which the Korean company has reigned supreme in this particular chart, the introduction of the iPhone 5 has naturally lessened its domineering stance. Samsung enjoyed a majority 50.9% in the previous quarter, but with Apple belatedly bringing LTE to its iPhone range, it’ll be interesting to see how the numbers continue to alter as the iPhone 5 settles into the market.

The research on the statistics was carried out by Strategy Analytics, and also showed that consumers are really beginning to buy into the idea of LTE. Worldwide subscriptions to 4G LTE devices have increased dramatically to 50 million units, from just 9 million units last year.

As well as the iPhone 5, other big smartphone releases have contributed to the rise in those using 4G-compliant handsets. Granted, a great deal of them aren’t actually using them on 4G networks due to coverage and compatibility issues, but with many carriers seeking to rectify this issue, the reach of LTE should spike dramatically over the next couple of years. 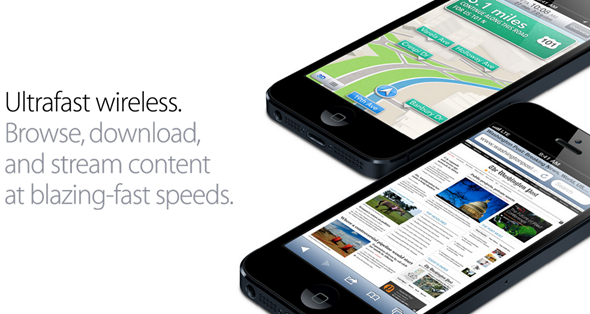 At present, LTE is enjoyed mainly by those residing in the United States, Japan, and Korea, but with the United Kingdom now running its first 4G network through EE (Everything Everywhere), and much of Europe following a similar push, the evolution is certainly in motion.

Of course, the sense of urgency is nowhere near as great than it was with the 2G / 3G changeover, since 3G is actually manageable, but with all the major devices now on board, it won’t be long before the networks are brought up to scratch.