The stock iOS lock screen can probably be described as functional rather than anything exceptional, but considering it is such a small section of the operating system as a whole. it manages to get the job done quite effectively. The Binary Clock tweak that has just landed in Cydia is one of multiple packages that aim to bring a little bit of life and extravagance to the lock screen, and although a number of developers have pushed out binary based packages in the past this release is one of the best and more polished creations that we have seen.

Before users go downloading and installing this package, it is worth noting that it does fully replace the original clock on the lock screen, and it is therefore a requirement that the device owner learns how to read the current time in binary format. The tweak takes the format of being a binary-coded decimal clock and is read from left-to-right with the current hours displayed first, followed by the minutes and then finally displaying the current seconds (HH:MM:SS).

The Binary Clock package comes with a set of configurable options that are available to access directly through the native Settings app and allows the user to make changes such as being able to change the color of how the time is displayed on the clock as well as changing the icons from cylindrical to heart-shaped. It may look extremely strange at first having this binary displayed time on the lock screen, but for those who already know how to read binary time then it offers a whole new dynamic to the native iOS lock screen and definitely makes the whole thing a lot more appealing. 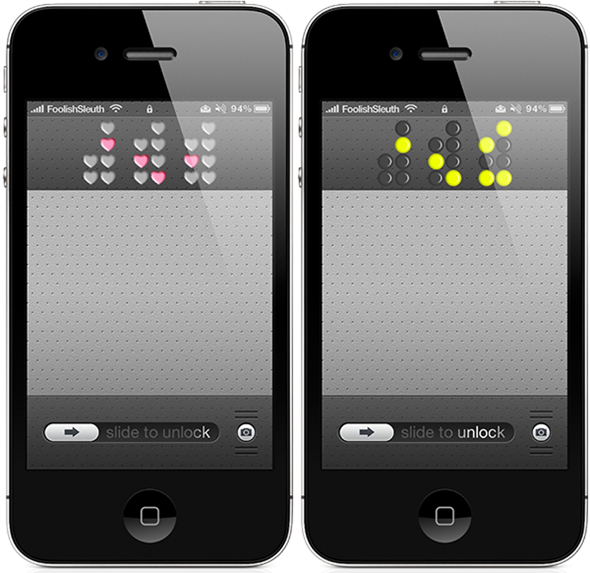 Even for those who have no idea how to read the time from a binary clock, it still makes the lock screen look interactive and colorful while managing to confuse others, hence it’s definitely worth downloading from Cydia.

Binary Clock is available as a $0.99 download from the BigBoss repository with no specific iOS version requirements being given.