Apple’s Face ID Vs Touch ID Comparison: Which Is Better And More Secure?

Here’s Apple’s Face ID Vs Touch ID comparison, detailing which one of the two is better or more secure than the other.

So here we are, a whole day after Apple announced the iPhone X and as the dust settles, we can now begin to truly appreciate what was announced during the event. There was of course plenty to get our teeth into, and the iPhone X was undoubtedly the biggest announcement of them all just as we expected it would be. While the display on the new flagship phone is obviously the first thing most will notice, the lack of the home button, and by extension Touch ID is another change that will catch the eye. 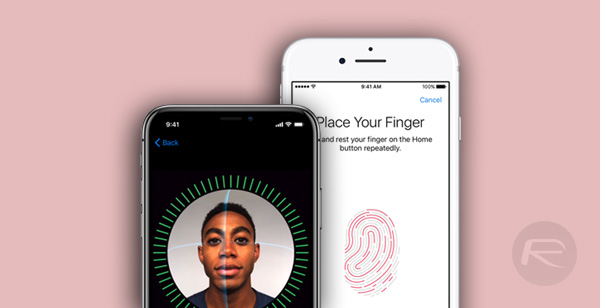 The advent of Face ID will mean the loss of Touch ID fingerprint scanning will not be a huge blow, but just how do the two security measures differ? With the arrival of Face ID, Apple appears to have taken the existing face recognition offerings and given them the accuracy and speed that they were previously lacking. We know Face ID, using its TrueDepth camera, will differ from Touch ID in how it is used, but how do the two technologies stack up? We take a look at both by comparing them in different situations below.

Face ID will continue to work even if you change your appearance, within reason. Glasses, growing beards, wearing makeup or hats should not fool Face ID one bit, but wear gloves, and Touch ID is out of the game completely. Face ID also works in pitch dark environments thanks to infrared sensor in TrueDepth camera module.

Perhaps less of a difference and more of something to note: Face ID only works when your eyes are open and you give attention to the phone, so if someone tries to force you to unlock your iPhone, all you have to do is look away or close your eyes to prevent that from happening. Additionally, a quick click of the Side button 5 times disables Face ID, and require a passcode from there on.

Apple says that Face ID cannot be fooled by someone wearing a mask, whereas there have been numerous reports by security researchers outlining how Touch ID can be fooled by reproducing fingerprints.

If you are asleep and someone wants access to your iPhone, Touch ID can be used by someone placing your thumb on the Home button. With Face ID, your eyes have to be open and you are definitely likely to wake up if someone tries to open them!

Another good-to-know fact: None of the data on your face and its structure ever leaves your iPhone to the cloud, meaning Apple never sees it either, just like Touch ID.

Apple says that Touch ID only had a 1 in 50,000 chance of unlocking for the wrong fingerprint whereas Face ID is even better: it has just a 1 in 1,000,000 error rate. However, this rate goes down if say, you have a twin.

Well, if you can’t fool the iPhone X with face masks, it is not surprising that Face ID will not be fooled with something so simple as a photo. Again, good to know!

Setting up Touch ID can be a real chore, sometimes needing you to lift and re-seat your finger multiple times before it is fully registered. Face ID needs none of that – one glance at your iPhone and it’s set up and ready to go.

Use beyond authentication and payments

The new TrueDepth front facing camera system on iPhone X for Face ID allows for things beyond unlocking and payment authentication. For example, it can be used for things such as Animoji, the popular Portrait Mode including the much hyped Portrait Lighting feature all using front-facing camera, and a new feature coming to other apps like Clips called ‘Selfie Scenes’ which will add animated background scenes to your selfies for a 360-degree experience.

So what are your thoughts on the new Face ID tech compared to the tried and tested Touch ID? Are you sold on the idea of unlocking your phone using your face and transacting Apple Pay payments, amongst other things?