Tim Cook seemed extremely excited to announce to the crowd that Apple now sold the number one watch in the world as we geared up for the Apple Watch Series 3 announcement.

In a similar event last year, Apple ranked number two in terms of watch sales globally, sitting behind only Rolex. But now, thanks to a staggering 50% growth in year-on-year sales, Apple has managed to climb to the top of that particular tree by ousting Rolex as manufacturer and seller of the top-selling watch globally. Keep in mind that this includes all watches (dumb/traditional and smart) combined, not just smartwatches. 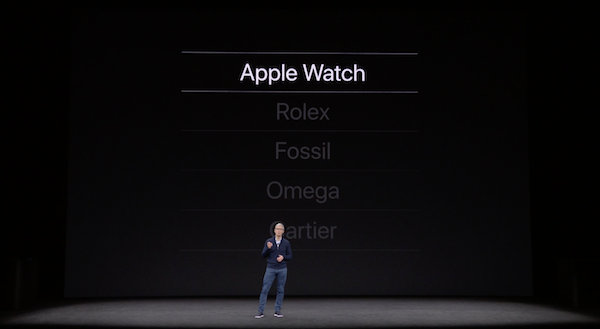 Being able to say that you sell the number one anything in the world is always an impressive statistic to be able to quote. Even more so when we are talking about something that almost every adult wears on their wrist on a daily basis, and especially when you are competing with the likes of Rolex and Tag.

Although Tim Cook didn’t go into any great detail on Apple Watch sales figures, other than to say that sales rose 50% year-on-year, Canalys predicts that the company shifted an estimated 11.9 million units last year alone.

Sitting at the top of that tree is a wonderful place to be, but it’s how Apple has got to that point that’s interesting. The company may be selling the world’s most popular watch now, but it doesn’t sell the world’s most popular wearable just yet, which is an interesting point to consider. Companies like Fitbit and Xiaomi sell fitness tracking wearables at considerably cheaper prices than what you can pick up an Apple Watch for, with logic dictating that more of those are going to fly off the shelves than Apple Watches. When it comes to all wearables combined, Apple Watch is ranked number three behind Fitbit and Xiaomi.

It’s almost interesting to note that watch exports from Switzerland fell 100% in 2016, with the likelihood being that Rolex has been affected by that drop. That market showed signs in early 2017 of being on the rise, but by just how much we will have to wait and see.