An analysis of social media mentions and expression of consumer sentiment across 700 million posts has placed the Apple Watch ahead of a number of premium watchmakers. Analytics firm NetBase has used the huge collection of social postings to essentially rank products and companies in an order derived by what consumers actually think about them based on what they are willing to say publicly. The Apple Watch may have been the only smartwatch in the “watches” category, but it still managed to fend off competition from some well-established, almost iconic watch manufacturers.

The list contains companies and products that are usually associated with the luxury niche. Taking number one in the “watches” category is a seriously impressive feat for the Apple Watch. Not only because it was the only intelligent smartwatch in the running, but also because it’s been available for less than a year and has clearly managed to resonate with owners in that short time.

It’s also notable as being placed number one in the rankings here essentially means that the company ranks the Apple Watch ahead of the likes of Rolex, Tag Heuer, Richemont, Patek Phillippe, and a host of other premium brands that you’d associate with the creme-de-la-creme of watch manufacturing.

Apple also come out with a fairly impressive ranking as an overall company at #4, but the company dropped by two places compared to last year. Overall rankings of #13 for the Apple Watch and #11 for the iPhone meant that Apple was able to position itself as the fourth most luxury brand in the world. The overall title of top luxury brand was given to Chanel, the privately held French company responsible for luxury goods and fashion accessories. There won’t be any panic buttons being pressed at Cupertino, but Apple may want to look into why the iPad dropped off this annual list entirely after being ranked relatively high in last year’s analysis. 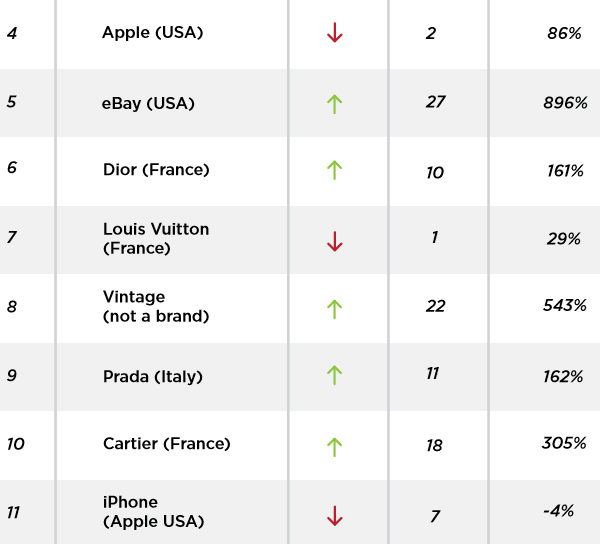 It’s likely that Tim Cook and his team of executives within Apple will be highly pleased with the fact that the company is being recognized as a premium brand. Partnerships with Hermes, as well as aggressively pursuing and hiring the former CEO of Burberry pretty much cements the fact that Apple sees itself as a premium offering in the consumer electronics space. Of course, it may not want to publicly acknowledge that internal thinking, but it’s clear from the way the company operates and the products it releases, that this is the direction it wants to continue in.