Apple is clearly extremely proud of its Apple Watch, and rightly so. The relatively recently released intelligent timepiece may have only been with us for half a year, but it’s already managed to carve itself a reputation for being the must have wearable. Not only is the company’s “most personal product yet” getting talked about positively by consumers and analysts alike, but it’s now also an award winner after picking up two prestigious gongs at this year’s T3 Awards.

The wearable market is becoming increasingly competitive as companies like Apple and Samsung look to capture the imagination of consumers with their inventive wares. Apple may have been a latecomer to the wearable market, but by waiting patiently and seeing what other manufacturers release, the Cupertino-based company has been able to learn from the mistakes of others to introduce a watch that is extremely desirable. Not only is it desirable, but it’s now also officially the “Best Wearable”, and “Gadget of the Year”. 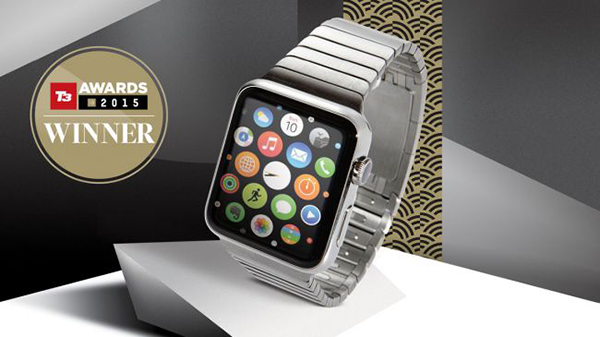 Apple has a reputation for entering into existing markets and transforming them with its products. Apple wasn’t the first company to release a smartphone, nor was it the first company to introduce a smartwatch, or a laptop computer for that matter. With that said, it’s no surprise that it manages to sit at the top of the food chain in all of these markets. Rob Carney, editor of T3, discusses why the Apple Watch managed to pick up the two awards:

Once again Apple has produced a product that has galvanized a market. In a year of outstanding new products, this stood out to all of the judges and voting public as THE outstandingtech of 2015. The tech and fashion media have nothing in common, yet both enthused about the Apple Watch.

The recognition didn’t stop there for Apple and its products. The iPad Air 2 was named “Best Tablet”, while Apple itself was awarded with the honor of being named “Brand of the Year”. Other winners of prestigious T3 Awards included the Samsung Galaxy S6 Edge, which picked up the “Phone of the Year” gong, and Oculust Rift founder Palmer Luckey who was honored with an “Outstanding Achievement” award. There was even a “Design Innovation” award for Microsoft for its work on the HoloLens headset.