According to new estimates, the Apple Watch is likely to hit the 3 million sales mark in the first two weeks of it going on pre-order, generating a massive revenue of $2 billion. Reports are suggesting that Apple’s new wrist-strapped gadget could in fact be the company’s most profitable product ever.

The Apple Watch was initially available in limited stock on the 10th of April when the company started accepting pre-orders for the device, and was sold out in just a few hours. According to previous reports, Apple had sold more Apple Watch devices in the first 24 hours than all Android Wear smartwatches combined till date, with rough estimates pinning the total pre-orders at almost 2.3 million units almost a week back.

Carl Howe, a leading technology analyst believes that of the 3 million Apple Watch devices that Apple is likely to sell in the first two weeks, over 1.8 million units will comprise of the Sport model, while sales of the Apple Watch steel variant will be at 1.2 million units. The gold Apple Watch Edition units being uber-expensive, will hit the 40,000 mark.

According to Howe, the Apple Watch has a gross margin that will likely exceed 60 percent, given that the components used in the device don’t cost so much. Howe explains how Apple will gain huge amounts of profit with the Apple Watch, and says: “And while adding Gold cases and designer bands add cost to the bill of materials, the costs are small compared to the price premiums paid for these products. Unlike in the consumer electronics business, I see no pressure for prices to fall and if anything manufacturing costs will, resulting in a very profitable business.” 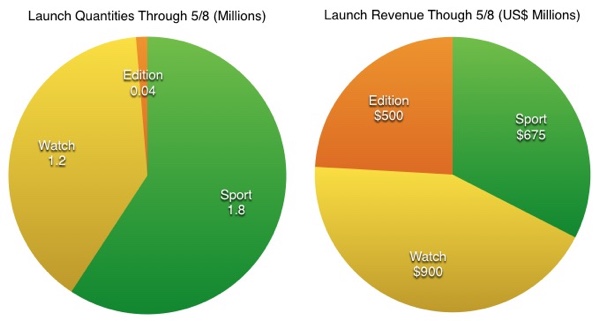 It is important to note that these are merely predictions based on existing data, and as suggested by Howe, some of the information is reflective of the U.S. market only, so there’s a good chance the figures reached are understated with respect to global sales of the Apple Watch. However, as expected, it is being speculated that the Apple Watch Edition may hold a tiny portion of the total Apple Watch sales, but the model will account for “almost a quarter of total revenue – and be halfway toward a billion dollar business in its own right.”