Apple doesn’t share Apple Watch sales with anyone externally but that doesn’t stop people from trying to work out just how many of the wearable the company is able to shift.

Now, new data from Canalys claims to be able to give us our best idea of numbers yet, comparing how Apple Watch sales fared the competition during Q1 of 2018. If the numbers are accurate, Apple was not only the most popular wearable maker during the period but it also found itself dominating the cellular smartwatch sales, too.

While Apple doesn’t share its Apple Watch sales, CEO Tim Cook did say that last quarter saw the “Apple Watch growing strong double digits to new March quarter record.” Canalys and its data shows Apple continues to be the most popular wearable maker on the planet ahead of competition like Fitbit and Garmin, two firms that were in the market much sooner than Apple.

According to those Canalys numbers, the wearable market grew 35% year over year with a total of over 20 million units shipped. Apple Watch made up 3.8 million of those, with Xiaomi not far behind having shipped 3.7 million units. However, that figure includes the Chinese company’s $27 Mi Band, something that surely skews the numbers somewhat with around 90% of the company’s wearable sales taken up by that band. If the Apple Watch is compared to other smartwatches alone, the picture changes considerably.

Apple’s wearable dominance is highlighted by the ceullar market, too. Canalys says that Apple accounted for 59% of the sales.

“Key to Apple’s success with its latest Apple Watch Series 3 is the number of LTE-enabled watches it has been able to push into the hands of consumers,” said Canalys Senior Analyst Jason Low. “Operators welcome the additional revenue from device sales and the added subscription revenue for data on the Apple Watch, and the list of operators that sell the LTE Apple Watch worldwide is increasing each month.” 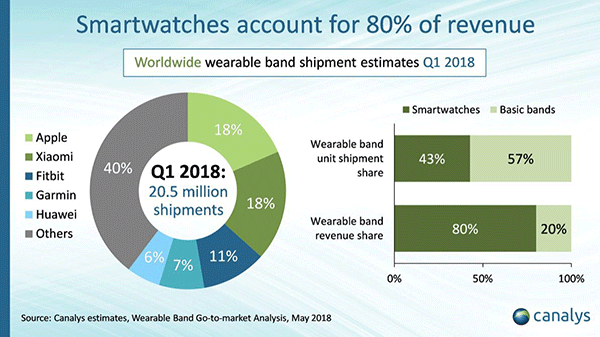 All this does is make us really wish Apple would share its own, obviously more accurate, numbers so we could be sure exactly how the wearable is doing. If these numbers are anywhere near accurate, then it’s apparently doing pretty well indeed.