How To Get Free Personal Hotspot Tethering On iPhone Without Jailbreak

Do you fancy having an iOS app available directly on your non-jailbroken iPhone that creates a SOCS Proxy allowing you to connect your laptop to the Internet via your iPhone’s data connection, making it possible for you to enable free Personal Hotspot tethering without having to use jailbreak tweaks like TetherMe? We have finally got a solution for that.

Any hardened iPhone or iPad user should know by now that the official App Store is crammed full of excellent apps and games which cover pretty much every genre that you can imagine.

However, the savvy iPhone owners from that group also know that some of the best and most useful apps and services have to exist outside of the App Store environment due to the fact that they contravene Apple’s almost draconian App Store rules, and, as such, aren’t allowed to exist on the App Store. That’s where the benefits of jailbreaks and sideloading IPA files come in.

As mentioned, this particular application gives you the ability to tether your mobile data account on your Windows or macOS-based laptop via the creation of an ad-hoc wireless network for internet sharing.

Who is it useful for? Well, those of you who are on a carrier plan which charges extra for enabling or using Personal Hotspot tethering feature, this should come in handy as it will essentially allow those users with an ability to get tethering feature enabled on their iPhone for free without their carrier coming to know about it. It essentially does what TetherMe does but without needing jailbreak.

Now apparently, this particular app has been around for a while in one form or another but has recently been re-compiled into an accessible IPA form to bring it back to the attention of those with non-jailbroken devices, as well as iOS 11 compatibility.

This new IPA file is based on the old codebase and the previous work done by Ricky Zhang but has had no official input from the original developer. Now that it has been re-compiled, it’s available to download and use, albeit with a little bit of tinkering and advanced setup and knowledge needed in order to have everything functioning as expected. 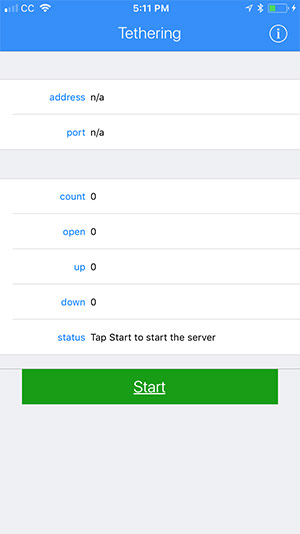 If you are interested in this particular project and the functionality that it offers, then you can grab the latest compiled IPA file from here. That will give you the file you need to sideload the app onto your device.

From there, you will need a little bit of knowledge on how to configure the necessary equipment to get it up and running, which you can find on GitHub page where the project was first created and launched. Yes it’s a bit technical but if you get it all up and running, it will be well worth the effort.