PhoneArena has managed to grab leaked documents of the upcoming Apple tablet via an anonymous tipster, which reveals the detailed specifications of the said device. While the authenticity of the document is in question, what is more interesting is the fact that it will be running on top of Intel Core 2 Duo processor, will feature projection capabilities, and will be powered by OS X 10.7 “Clouded Leopard”. 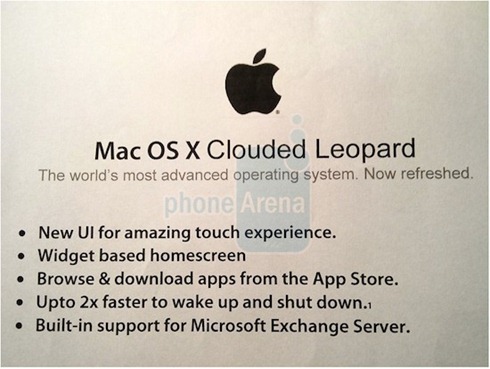 First up, a Core 2 Duo processor is way too much for an internet tablet like device, and it wont help Apple keep the tablet size as thin as some of their other products. The projector feature may sound cool to some but it is probably not something that I think Apple would like to include in a version 1.0 of the device. And finally “Clouded Leopard” ? now that doesn’t make much sense as Apple has recently released OS X Snow Leopard for desktops, and iPhone OS (aka OS X Mobile) runs on their portable devices such as iPhone and iPod touch. If anything, Apple tablet will most likely be based on the iPhone OS (aka OS X Mobile) rather than the fully featured desktop version of OS X, with full compatibility to run apps from the App Store.

The leaked specifications document in question is attached below. Check the specs out and judge them yourself on whether this is the read deal or not? 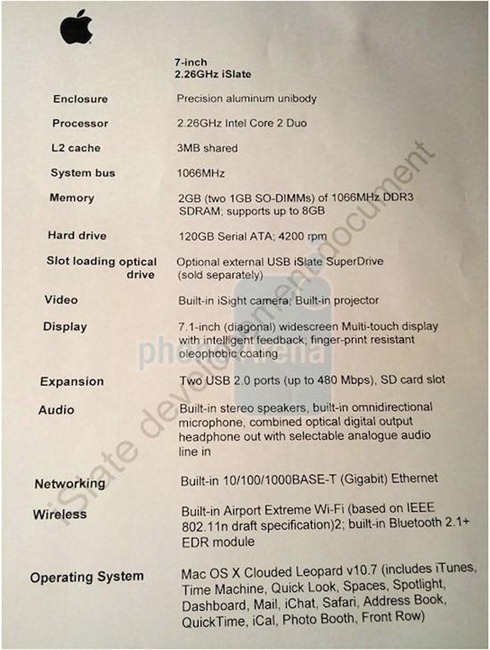