iSlate is the New Apple Tablet?

Rumors about the Apple’s forthcoming tablet device are hot and spreading like fire. Earlier this week, Apple reportedly asked developers to prepare their existing iPhone apps for larger displays. They then booked the Yerba Buena Center for the Arts in San Francisco for a possible event to unveil the rumored Apple tablet device.

Today, the big news is that MacRumors has discovered that Apple purchased the domain "iSlate.com" back in 2007. Domain was registered through some intermediary, to disguise the real owner. 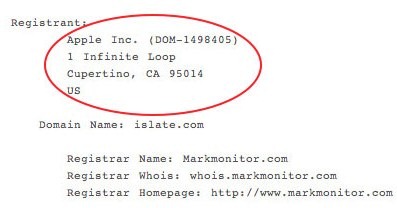 This rumored Apple tablet, which is seems to be creating lots of enthusiasm among the fans, is likely to be well received by them. Rumor also has it that Steve Jobs is extremely happy with the upcoming tablet. The source who is a recently departed Apple employee, discloses:

Lot of speculations are in the air as to how the users are going to interact with this tablet. Most probable assumption is that Apple’s forthcoming tablet could be a dynamic surface that would give users tactile feedback when typing in order to identify individual keys.