When it comes to reading tea leaves to try and work out what Apple has up its sleeve as far as future products are concerned, patent applications can sometimes offer a little insight but are generally accepted to not be the most reliable of sources.

Apple is known to work on all kinds of things during development, patenting everything as it goes.

The application for a patent, or even one being granted, does not always mean that a product is imminent or even that the patent will ever see the light of day. Still, when a new patent application is made public by the US Patent & Trademark Office, it is worth paying attention.

That is exactly what has happened now, with a new application published yesterday and seemingly outlining what could be a case or bag for a MacBook or similar device. Apple’s new bag would, based on the patent, use magnets in order to open and close and would also have room for the inclusion of “personal articles,” suggesting we may have somewhere to put our keys and wallets if this ever makes an appearance in the real world.

According to Patently Apple, the magnets would live along a seam, allowing them to be used to both open and close it. When open, the magnets would repel each other but when closed they would act as a mechanism for keeping the case or bag closed. 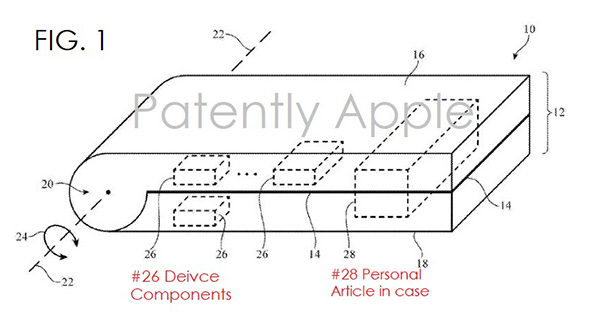 The figure shared by above gives us little in the way of any idea as to what a new MacBook case or bag like this could look like, but the fact that “personal items” are mentioned would suggest there would be plenty of room in this thing if it ever came to market.